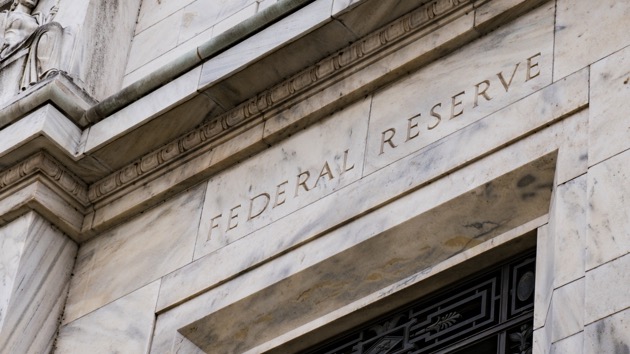 (WASHINGTON) — President Joe Biden announced Monday he will nominate Federal Reserve Chairman Jerome Powell to a second four-year term amid new concerns about controlling inflation and took the opportunity to respond to those who have voiced opposition to Powell’s nomination.

“As chair, Jay undertook a landmark review to reinforce the Federal Reserve’s mission towards delivering full employment, for making strong progress towards that goal now, and I believe Jay is the right person to see us through and finish that effort while also addressing the threat of inflation and what it poses to our economies and families,” Biden said at an afternoon event at the White House alongside his nominees.

“Put directly, at this moment of both enormous potential and enormous uncertainty for our economy, we need stability and Independence at the Federal Reserve. Jay’s proven the independence that I value in the federal — in the fed chair. In the last administration, he stood up to unprecedented political interference and in doing so successfully maintained the integrity and credibility of this institution. It’s just one of the many reasons that Jay has support from across the political spectrum,” he added, before inviting Powell to speak.

Biden also said he would nominate Dr. Lael Brainard, a longtime Federal Reserve official and former Treasury Department undersecretary, to serve as vice chair of the Board of Governors of the Federal Reserve System.

“While there’s still more to be done, we’ve made remarkable progress over the last 10 months in getting Americans back to work and getting our economy moving again. That success is a testament to the economic agenda I’ve pursued and to the decisive action that the Federal Reserve has taken under Chair Powell and Dr. Brainard to help steer us through the worst downturn in modern American history and put us on the path to recovery,” he said in an earlier statement.

The announcement follows recent questions surrounding whether Biden would renominate Powell, a Republican, who was nominated to chair the Federal Reserve in 2017 by then-President Donald Trump. Powell was first nominated to the Federal Reserve Board of Governors by then-President Barack Obama in 2011 before Trump elevated him to succeed Janet Yellen, who now serves as Biden’s treasury secretary.

“Fundamentally, if we want to continue to build on the economic success of this year we need stability and independence at the Federal Reserve — and I have full confidence after their trial by fire over the last 20 months that Chair Powell and Dr. Brainard will provide the strong leadership our country needs,” he added in the statement.

Powell and Brainard both offered brief remarks at the White House, vowing to work on behalf of all Americans to increase the resilience of the economy.

“We understand that our decisions matter for American families and communities,” Powell said of their work at the Federal Reserve. “I strongly share that sense of mission and am committed to making those decisions with objectivity and with integrity based on the best available evidence in the longstanding tradition of monetary policy independence.”

As the president faced mounting political pressure in recent weeks to shake up the leadership by nominating Brainard to replace Powell, he talked with both Powell and Brainard about his decision on Friday, according to a source familiar with the matter.

The president regularly engaged with members and stakeholders around the decision, including with both progressives and moderate Democrats on Capitol Hill, the source said. Biden recently met with Sen. Elizabeth Warren, D-Mass., at the White House to get her input on the decision after Warren had publicly called Powell a “dangerous man” to lead the agency.

“Your record gives me grave concerns. Over and over, you have acted to make our banking system less safe, and that makes you a dangerous man to head up the Fed, and it’s why I will oppose your renomination,” Warren said in a hearing on Sept. 28. She said Monday she will oppose Powell’s nomination.

Biden and his team had also been in regular and close consultation with Sen. Sherrod Brown, D-Ohio, who chairs the Senate Banking Committee, according to the source. Brown said on Monday he would support Powell’s nomination.

Despite Brainard winning over progressives like Warren who argue she is tougher on bank regulation and climate change, by keeping Powell in place, Biden appears to be sending a message reaffirming the central bank’s independence from politics.

“Overall, with Mr. Powell remaining Chair, communication will remain clear and transparent and policy will not veer too far off from the current dovish path,” Rubeela Farooqi, chief U.S. economist at High Frequency Economics, an economic research consultancy firm, said in a statement to ABC News.

The nomination comes at a critical moment for the central bank, which has a mandate to contain inflation and sustain job growth. Powell has tilted “dovish” on inflation in recent months, insisting the run-up in prices will abate as the pandemic recedes and the supply chain untangles.

Powell oversaw a busy time at the Federal Reserve as it pumped unprecedented stimulus into the financial system in response to the pandemic and now starts to unwind some of that stimulus. Wall Street had been betting on his re-nomination as a way to keep continuity in policy at a tumultuous time in the economy.

If both are confirmed by the Senate, the White House will still have several seats to fill on the Federal Reserve Board, including the lead banking supervisor, allowing Biden the opportunity to reshape the central bank in a more drastic way with those picks.

Economists told ABC News they expect swift confirmation in the Senate for the nominees.

“We believe that Biden paired the announcement of the more Democratic-leaning nominee Lael Brainard with the Republican-leaning Jerome Powell to allay objections from the progressive members of the Democratic party,” said Kathy Bostjancic, Oxford Economics Chief U.S. Financial Economist.

Although at least three Democrats have signaled their opposition to Powell’s nomination, at least five Republicans have voiced support — so it appears he will be confirmed but not without multiple Republicans supporting Biden’s nominee. There were nine Democrats, including then-Sen. Kamala Harris, who opposed Powell’s nomination in 2018 when he was confirmed by the Senate in an 84-13 vote.

An aide to GOP leader Sen. Mitch McConnell confirmed that the minority leader is also expected to back Powell’s renomination. Others are likely to follow suit.

Republicans are looking to brand Powell as a source of necessary stability for an economy plagued by inflation and supply chain challenges, something they’ve repeatedly blamed Democrats for.

“In light of an economy hamstrung by COVID-19, and now supply chain issues and soaring inflation thanks to the Biden Administration’s debilitating policies, the Federal Reserve needs consistency,” Sen. Kevin Cramer, R-N.D., said in a statement. “Powell’s appointment is a sign of consistency, which is so important at a time like this. Stability and consistency are in the best interests of the American economy and I look forward to supporting his confirmation.”