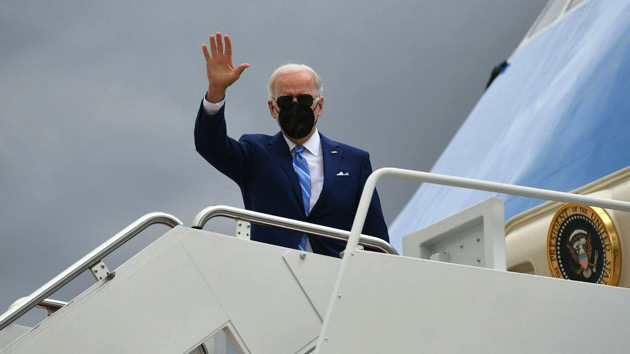 (MENLO, Iowa) — President Joe Biden traveled to Iowa on Tuesday for his first time as president to announce new efforts to bring down gas prices as the administration faces an 8.5% jump in the consumer price index compared to a year ago, which it attributes mostly to what the White House calls “Putin’s Price Hike.”

The March CPI report released Tuesday by the U.S. Bureau of Labor Statistics showed inflation is at its highest point in the U.S. in 41 years as rising prices have an impact on consumers worldwide. Prices were up 1.2% compared to just a month ago, the report said, raising concerns that, if the Federal Reserve gets more aggressive in raising interest rates to temper inflation, that might trigger a recession.

White House press secretary Jen Psaki tried to preemptively cushion the blow of the report numbers on Monday. She said the White House expected a large difference between core and headline inflation, pointing to the price of gas as the main reason for the discrepancy.

“Just as an example, since President Putin’s military buildup in January, average gas prices up more than 80 cents. Most of the increase occurred in March and gas prices, at times, prices were up more than a dollar above pre-invasion level. That roughly 25% increase in prices will drive tomorrow’s inflation rating,” Psaki said.

To address those prices, Biden will announce he plans to issue a temporary, emergency waiver for the summer to allow the sale of “E-15” — a blend of gas with 15% ethanol, rather than the usual 10%, which the White House says will bring down gas prices by 10 cents a gallon. Usually, E-15 is not sold in the summer because it’s believed to add to smog.

But the move will have a limited impact: Only 2% of gas stations around the country carry E-15, mostly in the Midwest. The White House countered a question from ABC News on whether the impact would be insignificant for Americans.

“Ultimately this is about giving Americans more options and more flexibility,” a White House official said. “President Biden knows that every cent matters and families will see savings even after taking into consideration the difference in energy efficiency.”

Inflation and even gas prices have been on the rise even before the invasion of Ukraine. A new ABC News/Ipsos poll found Americans are more likely to place a “great deal” or a “good amount” of the blame for the price increases on Democratic Party policies (52%) and Biden (51%) than on Republican Party policies (33%) and former President Donald Trump (24%). A strong majority of Americans (68%) also disapproves of the way Biden is handling gas prices.

Biden’s trip to Iowa comes with the midterm elections seven months away. It’s a state he spent a lot of time in amid the 2020 campaign, but ultimately lost to former President Donald Trump by nine points.

While his remarks are set to focus on his administration’s actions to lower gas prices and the bipartisan infrastructure law passed last year, Biden might feel obligated to address Tuesday’s report, which showed increases in prices for gasoline, rent and food were the largest contributors to inflation for Americans. Gasoline prices rose 18.3% compared to a month ago and were a major contributor to inflation; other energy prices also increased. Food prices increased by 1% and the food at home prices by 1.5%.

Aside from food and energy, rent was the biggest factor in the price increases. Airline fares, household furnishings and operations, medical care and motor vehicle insurance also contributed to inflation. Used cars and trucks fell 3.8% compared to a month ago.

The report, though in line with expectations, does nothing to temper concerns that the Federal Reserve has a tough job ahead of it in cooling this inflation without sparking a recession.

Inflation rises significantly in May, up to 8.6% year over year