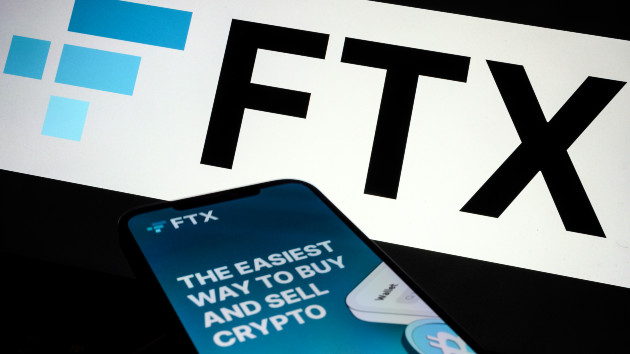 (NEW YORK) — The cryptocurrency sector is reeling after the collapse of FTX, a digital currency exchange valued earlier this year at $32 billion and made famous by a Super Bowl ad starring comedian Larry David.

Concerns of financial instability at FTX — a top platform where users buy and sell crypto — triggered a wave of customer withdrawals totaling billions of dollars. But FTX lacked sufficient funds to pay sellers, instead imposing a halt on withdrawals altogether. On Thursday, FTX reopened withdrawals to some users, cryptocurrency news outlet CoinDesk reported.

Still, some crypto traders on the platform cannot access their money and may never get it back. The debacle coincides with a rough year for crypto, as the value of bitcoin has fallen more than 60%.

Sam Bankman-Fried, 30, a prominent crypto entrepreneur and the CEO of FTX, apologized on Thursday, saying he “should have done better.” Meanwhile, Gary Gensler, head of the Securities and Exchange Commission, responded to the crisis on CNBC with a call for bolstered crypto regulation: “Investors around the globe are getting hurt,” he said.

FTX did not immediately respond to ABC News’ request for comment.

Here’s what you need to know about the collapse of FTX and what it means for the future of cryptocurrency:

The fall of FTX centers in part on the cryptocurrency exchange’s close relationship with Alameda Research, a crypto hedge fund also founded by Bankman-Fried.

Major concerns about FTX started last week when CoinDesk published an article that found a significant portion of Alameda Research’s assets consist of FTT, a token created by FTX that allows users of the exchange to access discounted trading fees. Because FTT is relatively illiquid, the report raised fears among some about the capital reserves at Alameda Research and thus FTX.

“The basic risk is if other investments at Alameda went underwater – and many crypto investments have been falling in recent months – then they may not have been able to repay funds to the exchange,” David Yermack, a professor of finance at New York University’s Stern School of Business, told ABC News.

In response to the article, Changpeng Zhao, the CEO of rival crypto exchange Binance, said on Sunday that he would sell the company’s $580 million-worth of FTT.

The major exit from a crypto heavyweight triggered a wider selloff totaling about $5 billion in a single day, placing immense pressure on FTX to meet the sudden demand for withdrawals.

“It’s a lot like a bank run where there were rumors that essentially the reserves of FTX were not large enough to meet the demand of customers,” Yermack said. “People began queuing up in large numbers to try to make a withdrawal from funds and deposits on the exchange.”

Due to a lack of funds, FTX halted customer withdrawals. On Tuesday, FTX reached a deal to sell itself to Binance, the crypto exchange whose executive had helped trigger the selloff. But Binance pulled out of the deal the next day, leaving FTX in need of a way to raise cash.

Despite its financial straits, FTX on Thursday reportedly reopened withdrawals for some users.

What will happen next for FTX

To address the capital shortage, Bankman-Fried said on Thursday that he is trying to raise liquidity from a variety of financial entities.

Ultimately, FTX faces two potential paths out of the crisis, said Yermack, of New York University. In a first scenario, FTX could try to sell itself to a different firm, as it did in its attempt to merge with Binance.

Such a scenario is akin to the collapse of Bear Stearns during the 2008 financial crisis, when the investment bank sold to JPMorgan Chase at the basement price of $2 per share, Yermack said. In this case, FTX is so distressed that it would likely have to pay a company to take on its balance sheet, especially in light of overall challenges in the crypto sector, he added.

“The climate in crypto is so bad that I’m not sure anyone would want to own the accounts and liabilities of an exchange like FTX,” Yermack said.

A second option available to FTX is to liquidate its holdings and potentially file for bankruptcy.

“It wouldn’t surprise me if they had a winding down of the business,” Yermack said.

In such an outcome, crypto traders unable to withdraw funds from FTX stand to potentially lose their money.

What it means for the future of cryptocurrency

The collapse of FTX offers a cautionary tale for cryptocurrency traders and investors.

Gensler, of the SEC, warned on CNBC on Thursday that “the runway is running out” for firms in the sector seeking to avoid regulatory enforcement.

Eswar Prasad, a professor at Cornell University and the author of The Future of Money: How the Digital Revolution is Transforming Currencies and Finance, said the challenges at FTX could spur a regulatory crackdown.

“This episode and a few others preceding it will inevitably tighten regulators’ skepticism about this budding ecosystem,” Prasad told ABC News. “It will increase their desire to fence off the traditional financial system from this newly evolving ecosystem.”

Tumult is nothing new for cryptocurrency, however, Yermack said, suggesting that the sector may bounce back, as it has after past downturns.

“Volatility in this area has always been extremely high,” he said. “I can point to five or six plunges in crypto assets and they’re always followed by big recoveries.”

“That’s not to say that will happen again,” he said. “Nobody knows what the future holds.”