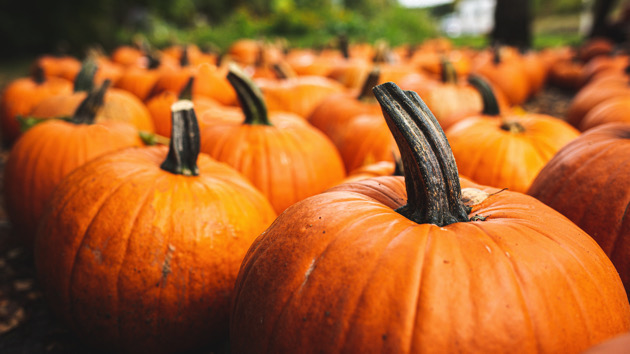 (NEW YORK) — As prices continue to climb on an array of goods due to inflation and increased production costs — like fuel for transportation — farm owners have warned that pumpkins could have a higher price tag this season.

With Halloween fast approaching, pumpkins used for jack-o’-lanterns and fall decor are up to $5.68 compared to $4.92 last year on average and may vary by location.

“The price of fuel has affected everything, the fertilizer for … pumpkins has been, you know, unbelievable,” Tammy Adkins, a farmer in Salisbury, Maryland, told ABC News affiliate WMDT. “It seems that everything has gone up and of course parents see that at the grocery store so it’s affected us as well.”

In addition to the rising costs, farmers have reported that drought conditions have also impacted some crops.

“We didn’t have much rain in August, so the hot weather — where it gets above 90 degrees — we didn’t get the pollination we should’ve got,” Gaylon Adkins the owner of Adkins Farm Market said. “So we’re looking at about probably a half a crop of pumpkins.”

The summer of dry weather has forced farmers like Adkins to get creative.

“I’ve already bought a few of pumpkins up in Delaware, I’ll probably get some in Pennsylvania,” Adkins continued. “I really need to finish picking my field and see what I got but I know I probably will not have enough.”

At Happy Day Farm in New Jersey, owner Tim Stockel said families can still get their hands on fall crops but said they may look different this year.

“Pumpkins this year are a little bit smaller due to the lack of rain,” Stockel told ABC News. “But they are healthy and we do have an abundance of amount to pick from.”

With Americans set to spend a record $10.6 billion celebrating Halloween this year, according to the National Retail Federation, and $3.4 billion of that on decorations, consumers will need to find ways to save without compromising on the staple squash.

Dr. Kerri Camp, a marketing professor at the University of Texas at Tyler, suggests “purchasing from local farms — because transportation costs will have less of an impact on the actual pumpkin prices.”

How did Democrats avoid a midterms backlash over inflation?

Tips for Thanksgiving 2022 amid inflation, rising food costs and ways to save

Forecasters expect inflation to have cooled slightly in October

Inflation has helped decide elections worldwide. Here’s what that means for the midterms.