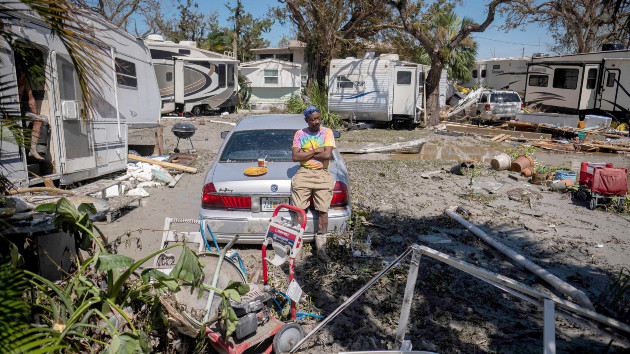 (NEW YORK) — Hurricane Ian flooded major cities and devastated homes after it made landfall in Florida — but the damage isn’t done.

After temporarily becoming a tropical storm, Hurricane Ian accelerated to Category 1 strength on Thursday night as it barreled toward South Carolina, with landfall expected on Friday.

In all, the economic damage wrought by the hurricane could reach up to $65 billion, according to a projection released on Thursday by data firm Enki Research, which studies the financial impact of storms.

The historic storm demolished homes and businesses, damaged infrastructure like roads and bridges and appears to have harmed citrus fruit trees that make up a key industry in the state.

Florida accounts for 70% of citrus fruits — such as oranges, grapefruits and tangerines — produced in the U.S.

Fixtures of the state’s tourism industry, like Disney World and Universal Orlando, temporarily closed as the storm approached earlier this week. On Friday, the parks announced that they would begin to reopen in phases.

Speaking on Thursday, Biden vowed support for state and local officials as they assess the damage caused by the storm, saying the federal government will cover the full cost of clearing debris and of rebuilding public buildings like schools and state fire stations.

The government will also be providing support to people with destroyed or damaged homes.

More than 8,700 people have registered for aid from the Federal Emergency Management Agency, or FEMA.

On Wednesday, the then-Category 4 hurricane sustained wind speeds of 150 mph as it made landfall on Florida’s west coast.

The storm struck the coastal city of Fort Myers, and affected nearby cities of Tampa Baby and Sarasota, before traveling east across the peninsula toward Orlando.

“It’s definitely going to be one of the stronger storms and more damaging storms,” Chuck Watson, Enki Research founder and director of research and development, told Bloomberg on Tuesday.

Hurricane Charley, a major storm that struck Florida in 2004, caused damage that today would amount to between $20 billion and $25 billion, Watson said.

The projected costs for Hurricane Ian would amount to less than half of the damage caused by Hurricane Katrina, which totaled $161 billion.

While it caused major damage, Hurricane Ian avoided a large disruption of the U.S. oil and gas industry, which would have come about if the storm had traveled toward Texas and Louisiana, industry analysts previously told ABC News.

The state doesn’t host any oil refineries and accounts for about 6,000 barrels of oil production each day, said Andy Lipow, a longtime oil analyst and president of Lipow Oil Associates.

That output makes up a tiny fraction of overall U.S. oil production, which amounts to 11.8 million barrels per day, the U.S. Energy Information Administration reported this month.