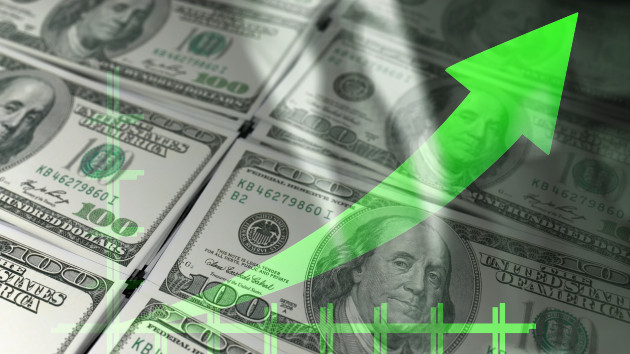 (WASHINGTON) — Consumer prices are up 7.7% over the year ending in October, but that’s a significant drop from the 8.2% inflation rate a month prior and below 8% for the first time since February.

The report outperformed the expectations of economists, who had predicted a CPI increase around 7.9%.

On a monthly basis, the consumer price index increased at a rate of 0.4%, rising at the same pace that it underwent in September, the Bureau of Labor Statistics said on Thursday.

While year-over-year inflation slowed, it remained near a 40-year high, defying a string of aggressive rate hikes from the Federal Reserve aimed at bringing inflation down to normal levels.

“Today’s report shows that we are making progress on bringing inflation down, without giving up all of the progress we have made on economic growth and job creation,” President Joe Biden said in a statement Thursday.

“My economic plan is showing results, and the American people can see that we are facing global economic challenges from a position of strength,” he added.

The Fed last week raised its short-term borrowing rate another 0.75%, marking the latest in a string of jumbo-sized borrowing cost increases imposed by the Fed in recent months as it tries to slash price increases by cooling the economy and choking off demand.

The approach, however, risks tipping the U.S. into a recession and putting millions out of work.

The data release arrived two days after the midterm elections, when Democrats outperformed forecasts of a voter backlash against the party in control of Congress and the White House expected in part due to frustration over sky-high consumer prices.

Polling released days before the elections found that 80% of likely voters considered the economy a top issue in their vote for Congress; while 77% said the same about inflation specifically, an ABC News/Washington Post survey found.

Still, a Republican wave election did not materialize. As of Thursday, control of the House and Senate had yet to be determined.

Despite persistent inflation, growing evidence suggests that the Fed’s rate hikes have put the brakes on some economic activity.

Job growth has persisted at a strong rate but has shown signs of moderating.

The U.S. added 261,000 jobs in October, exceeding economist expectations and demonstrating the continued strength of the labor market.

U.S. gross domestic product grew 2.6% over that period; by contrast, economic activity shrank a combined 2.2% over the first six months of the year.

Inflation, however, remains a top concern for federal policymakers.

When facing high inflation, policymakers fear what’s referred to as a price-wage spiral, in which a rise in prices prompts workers to demand raises that help them afford goods, which in turn pushes up prices, leading to a self-perpetuating cycle of runaway inflation.

However, the October jobs data was the latest to ease such concerns. Average hourly earnings rose 4.7% over the past year, well below the inflation rate and a decline from 5% year-over-year wage growth the previous month.

Amazon layoffs will continue into next year, CEO says

How did Democrats avoid a midterms backlash over inflation?

Tips for Thanksgiving 2022 amid inflation, rising food costs and ways to save

Forecasters expect inflation to have cooled slightly in October