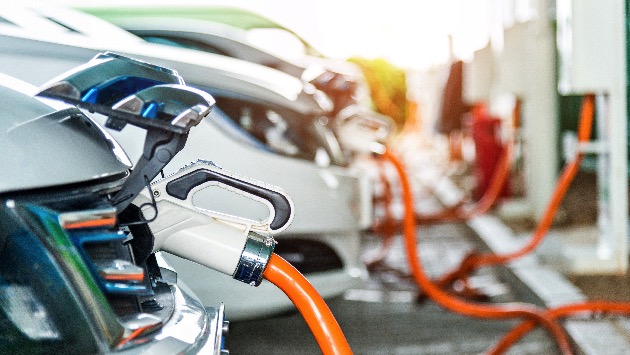 (NEW YORK) — Charging an electric vehicle is simple and painless — if you have a charger installed at home.

Automakers are producing EVs at a feverish pace with government backing. Yet the number of public charging stations, critical for mass EV adoption, is lacking.

There are fewer than 46,000 EV public charging sites currently in the U.S., according to Department of Energy data. In comparison, the number of gasoline fueling stations in the country totals more than 150,000.

There are several EV-charging network providers currently in the market: EVgo, Blink, ChargePoint, Volta, Wallbox and Electrify America, which is owned by Volkswagen. These companies maintain, build, operate or lease their equipment to businesses, individuals and governments and offer subscription services to members.

The Biden administration has targeted half of all new car sales in the U.S. to be electric in less than 10 years. To reach this goal, at least 1 million fast-charging stations will be required, according to Cathy Zoi, the CEO of EVgo. There are currently 5,627 fast-charging sites in the nation.

At-home EV charging allows drivers to plug in their vehicles at night and wake up in the morning to a full battery charge. Many apartment and condo dwellers though are dependent on public charging stations to juice their emissions-free vehicles, a scenario that can mean long wait and charging times.

“Thirty percent of Americans do not have access to home chargers,” Zoi told ABC News. “We need the infrastructure to get the consumer confidence.”

EVgo has been partnering with major retailers like Safeway, Albertsons, Whole Foods and Kroger to install charging stations in their shopping parking lots. The company also teamed up with General Motors in 2020 to build 2,700 new fast stations over the next five years.

“We’ve identified 40 metro areas in America’s heartland that are part of this program,” Zoi explained. “The Biden infrastructure money can get us into places even farther afield in rural America.”

President Joe Biden’s $1 trillion infrastructure package, which was recently passed by Congress, includes $7.5 billion toward a nationwide network of 500,000 EV charging stations by 2030.

Michael Farkas, CEO of EV charging operator and provider Blink, said the $7.5 billion — half of Biden’s $15 billion proposal as presidential candidate — will not be enough to accomplish the electrification goals cited by automakers and government officials.

“It will push things along but it will take substantially more [money] than that,” he told ABC News. “Every state is lacking in infrastructure — even California. We have a massive need for chargers both in the U.S. and globally.”

Construction of an EV station can take four to eight weeks, according to Zoi, and the cost depends on the type of charger. A Level 2 charger, commonly found in residential and commercial/workplace settings, costs between $3,000 and $5,000 to install. DC fast chargers, which allow drivers to recharge 80% of a vehicle’s battery in 30 minutes, start at $125,000 but can top out at $300,000.

The bigger challenge to installing charging networks may not be the cost. Getting approvals from local officials and municipalities can often be a complicated process that lasts weeks or even months, said Zoi. Plus, connecting to the grid presents its own hiccups.

“We’re working with the electric utilities to make sure the local power infrastructure can support fast charging,” Zoi said.

Even in California, which has the highest share of EVs of any U.S. state, public charging stations are far from ubiquitous, said Karl Brauer, executive analyst of iSeeCars.com and a longtime California resident.

“EVs still take a whole lot of planning. You have to know how long your trip is and carefully plan your charging schedule and locations,” he told ABC News. “The infrastructure is terrible. The good news is that there are not many EVs on the roads.”

The ability to charge on the go and travel long distances will move the needle on EV adoption and sales, Brauer said. Yet installing and deploying chargers is a risky business right now.

“There doesn’t seem to be any money being made in EV charging stations,” he said. “What’s the incentive to buy an EV station when there isn’t a profit motive?”

Not enough public EV chargers could dissuade some Americans from swapping their gas-powered conveyances for green vehicles, according to Mark Wakefield, managing director of consulting firm AlixPartners.

“The charging infrastructure is tricky. There are a lot of stakeholders involved and an awful lot of players to coordinate, government included,” he told ABC News. “Range is the No. 1 reason [among Americans] not to buy an EV. The No. 2 reason? Not enough places to charge.”

He added, “Consumers want automakers to curate their charging experience. They want it to be seamless.”

Only 93 U.S. airport locations have charging infrastructure in place, with as few as two stations, according to AlixPartners. EV public infrastructure coverage continues to grow steadily though “most of the growth has been driven by Level 2 chargers,” the firm said in a recent report. DC fast chargers, however, are largely seen as the solution to revolutionizing EV ownership.

Federal tax incentives and subsides from states and and local ordinances can help offset the costs of these networks, said Wakefield. But the U.S. needs to invest $50 billion to accommodate EV growth, he noted.

John Voelcker, contributing editor to Car and Driver magazine who has covered EVs extensively, said part of Tesla’s sweeping success was its ability to create a supercharging network exclusive to its vehicles from the very beginning.

“I don’t think Tesla would have sold so many expensive EVs as it did without the ability to drive cross country. The company publicized the existence of this Tesla-branded network,” he told ABC News. “I am not seeing carmakers except for Tesla putting in big efforts to build these stations.”

He went on, “It says a lot about carmakers’ reliance on the free market to solve everything and their lack of understanding in EVs beyond the vehicle itself.”

EV stations in city streets and parking garages will also multiply to placate urban drivers, said Voelcker, noting that public charging stations in London have become part of the city landscape, with EV owners hooking up their vehicles to stations built curbside.

EVgo has big plans to expand its charging network from 1,600 DC fast chargers to 10,000 by 2025. Zoi’s team of site developers are actively scouring the country, looking for opportunities to service new EV owners.

Local support spikes for Ukrainian restaurants in the US

Electric pickup trucks are coming, but the road ahead could be rocky