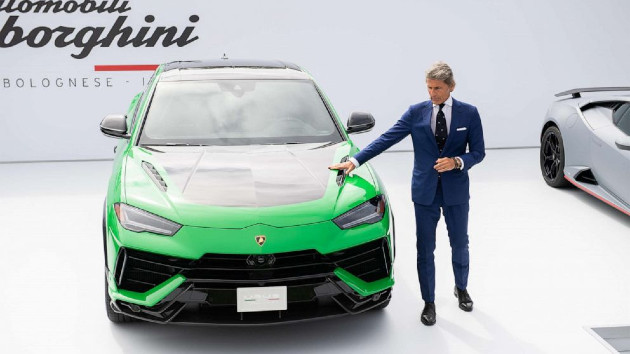 The Italian marque said Monday it has sold 7,430 vehicles in the first nine months of the year and is on track to beat its 2021 sales record of 8,405 units.

Deliveries rose in every market — U.S., China, Japan, Germany and the U.K. — with the V10-powered Huracan seeing the largest bump in sales.

The Urus, Lamborghini’s dynamic SUV that debuted in 2018, continues to be the brand’s No. 1 model, with 4,834 units delivered to customers so far this year.

ABC News spoke with Stephan Winkelmann, the CEO of Lamborghini, about the company’s latest roadmap.

He reminisced about the “end of an era” — the company bid farewell to its lustrous 12-cylinder Aventador supercar in September — and discussed the excitement surrounding Lamborghini’s first plug-in hybrid supercar that will soon enter production at the company’s factory in Sant’Agata Bolognese, Italy.

By 2028, the company will unveil an electric supercar — a 180-degree turn from the powerful, euphonious gas-powered engines that helped make Lamborghini a success. Customers are ready for the future and so is the company, Winkelmann asserted.

The interview below has been edited and condensed for clarity:

Q: Sales have been very strong this year. Will the company surpass its sales record of 8,405 cars in 2021?

A: We will be ahead of this number for sure. We have no slowdown in sales. Every month we’re selling more cars than we’re able to deliver.

Q: Some market watchers have been calling for a global recession. Has the company seen a change in demand?

A: We have two things to protect us if a crisis is coming. One, we have an incredible order bank, which is already exceeding 18 months. Two, in the next couple of years, we’re going to renew our complete lineup. A new car always creates positive vibes in the community of super sports car lovers. So these are things that are going to help us.

Q: If someone walked into a Lamborghini dealership in the U.S. right now, is there new inventory to buy?

Q: Let’s talk about the company’s plans for electrification. You said the entire lineup will be hybrid by 2024. Why not a fully electric car by then?

A: Things have to be done in the right time and with the right technology. The hybrid technology for us is the best in terms of performance and also in terms of technology. We will be the first super sports car brand to have a full hybrid lineup. The first [EV] model will come by the end of this decade, around 2028. By then we think our community of customers will be ready for buying fully electric super sports cars.

Q: Will the Urus be the first hybrid since it’s the brand’s bestselling model?

A: The first hybrid car will be the follow to the Aventador, which will have a completely new V12 engine and it will be a plug-in hybrid. We’re going to present the car at the end of the first quarter of next year.

Q: Are you accepting deposits or preorders for this hybrid car?

A: Yes, we already have preorders which are close to 3,000. This means the acceptance is very high even though very few customers have seen the car. So [customers] really believe we’re doing the right thing, which is a positive sign.

Q: Lamborghini bid farewell to the Aventador last month after more than a decade of production. How did that make you feel?

A: I was present on the first day we started the project. For me, this is an end of an era which in a way is quite sad, but there are also very good memories.

Q: What would Ferruccio Lamborghini, the company’s founder, think of Lamborghini’s new direction?

A: He would be proud of the development of Lamborghini. He was a challenger of the status quo — this is exactly what we are doing. We are safeguarding the DNA of the brand and the design and also what performance is all about. We’re not selling mobility. We’re selling dreams. He would appreciate this, I think, and he would also be happy at what Lamborghini has become.

Q: Is Lamborghini still impacted by the supply crunch and chip shortage?

A: It’s a constant challenge but so far we have managed not to lose any production capacity…we’ve actually increased our production capacity. Also the war in Ukraine was affecting us a little at the beginning because we have a big supplier in Ukraine but thanks to their courage and dedication this is solved and we recovered all the delays that were happening in the first couple of days of the war. We have no major constraints in terms of the supply chain. We never had the problem of parking cars with missing parts.

Q: An all-terrain Huracan will be the company’s final send-off to the internal combustion engine. How did this idea come about?

A: In 2015, we had the idea to do an all-terrain super sports car. We are the only super sports car company with a four-wheel drive system. When I came back to Lamborghini three years ago I said, ‘Guys, I want to do this car.’ It’s the last internal combustion car we’re launching and it will be shown at Art Basel in Miami.

Q: What will production be like for the all-terrain Huracan?

A: We will communicate the number at Art Basel. It will be a limited number and this will increase the value of the car even more because it’s the first time we’re doing a car like this. You cannot go on the dunes of the desert but you can drive the car on dirt roads. It’s about ground clearance — it’s higher than a normal super sports car but not as high as an SUV. So there is a limit to this but you can take it off-road for sure.

Q: There are complaints among some in the automotive world that electric vehicles can be mechanical and not as enjoyable to drive as gas-powered sports cars. How will Lamborghini handle that challenge as the company moves forward with electrification?

A: What makes a Lamborghini a Lamborghini is the design, the performance in terms of naked numbers — lap times, top speed, acceleration — and perceived performance, or how much emotion you experience when you drive our cars. Normally electric cars are very good at longitudinal acceleration but they’re not very pleasant to drive — i.e. cornering, braking behavior, the reaction on the steering wheel. This is something we have to prove and we’re working on this before the first electric car comes to market from Lamborghini.

Tesla slashes car prices as much as 20%

Southwest CEO apologizes to customers, employees: ‘There will be a lot of lessons learned’