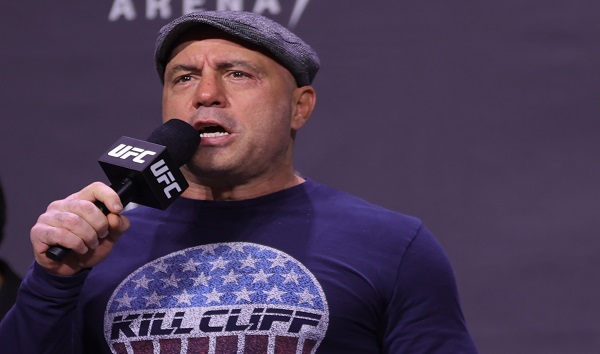 (NEW YORK) — Even in the face of mounting backlash, streaming giant Spotify is standing by embattled podcast host Joe Rogan.

While the controversy initially centered around the spread of COVID-19 misinformation emanating from Rogan’s namesake podcast, “The Joe Rogan Experience,” a viral video of the host using a racial slur dozens of times has intensified calls for action in recent days. The video was posted by Grammy award-winning musician India.Arie, who said she was joining fellow musicians in seeking to remove her music from Spotify because of Rogan. Spotify made headlines back in 2020 for reportedly licensing a $100 million deal to exclusively host Rogan’s often controversial digital talk show.

In the wake of the ever-evolving saga and immense social media backlash against Rogan, Spotify CEO Daniel Ek apologized to staffers in a memo Sunday obtained by ABC News. Ek said Rogan chose to remove several episodes from Spotify, but made clear that: “I do not believe that silencing Joe is the answer.”

“There are no words I can say to adequately convey how deeply sorry I am for the way The Joe Rogan Experience controversy continues to impact each of you,” Ek wrote. “Not only are some of Joe Rogan’s comments incredibly hurtful — I want to make clear that they do not represent the values of this company. I know this situation leaves many of you feeling drained, frustrated and unheard.”

Ek said Spotify has had conversations with Rogan and his team about his “history of using some racially insensitive language,” and that Rogan made the choice to remove some past episodes from the streaming platform.

“While I strongly condemn what Joe has said and I agree with his decision to remove past episodes from our platform, I realize some will want more,” Ek added. “And I want to make one point very clear — I do not believe that silencing Joe is the answer. We should have clear lines around content and take action when they are crossed, but canceling voices is a slippery slope.”

Ek said that one of the company’s core values is having an open platform, and because of this, they “must also believe in elevating all types of creators, including those from underrepresented communities and a diversity of backgrounds.”

The chief executive also said the company is committing to an “incremental investment of $100 million” for the licensing, development and marketing of music and audio content from historically marginalized groups.

“While some might want us to pursue a different path, I believe that more speech on more issues can be highly effective in improving the status quo and enhancing the conversation altogether,” Ek wrote.

In a video posted to Instagram on Saturday, Rogan said his past use of racial slurs is “the most regretful and shameful thing that I’ve ever had to talk about publicly.” He said the video compilation of him using a certain racial slur is “made of clips taken out of context” from 12 years of conversations on his podcast.

“Now I know that to most people, there’s no context where a white person is ever allowed to say that word, never mind publicly on a podcast, and I agree with that,” Rogan said. He added that he hasn’t used the racial slur “in years” and “never used it to be racist,” though he acknowledged that “I clearly have f—– up.”

“I can’t go back in time and change what I’ve said, I wish I could, obviously that’s not possible,” Rogan added. “But I do hope that this can be a teachable moment. For anybody that doesn’t realize how offensive that word can be coming out of a white person’s mouth, in context or out of context.”

Spotify previously responded to backlash over Rogan’s COVID-19 misinformation last week by saying it will add a “content advisory” label to any podcast episode that includes a discussion about COVID-19 and directs listeners to its “COVID-19 Hub” for up-to-date information on the virus as shared by public health authorities. Rogan also promised to add more guests with “differing opinions.”

While Spotify has managed to avoid the same level of scrutiny as fellow tech giants such as Facebook and Twitter for years, the firestorm of controversy surrounding Rogan has put the streaming giant at the center of a renewed public debate over the platform companies give to characters like Rogan.