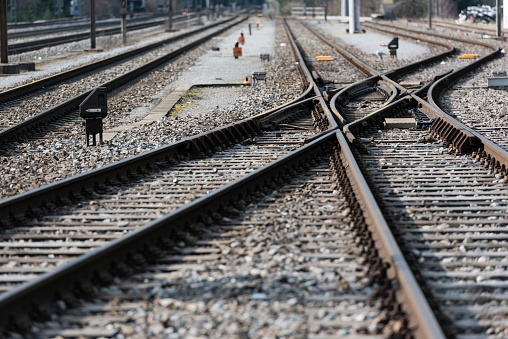 (WASHINGTON) — Hundreds of thousands of rail workers stand on the brink of a strike that would snarl the nation’s supply chain, driving up prices for households already under strain and eventually leaving some store shelves bare, supply chain analysts and industry groups told ABC News.

“Let me be clear: a rail shutdown would devastate our economy,” President Joe Biden said on Monday. “Without freight rail, many U.S. industries would shut down.”

A strike would cause $2 billion a day in lost economic output, according to the Association of American Railroads, which lobbies on behalf of rail companies. Rail transports about 40% of the nation’s long-distance freight and one-third of exports.

The economic costs of a strike would crunch the finances of everyday Americans forced to pay more for products and forgo others in short supply, the experts and trade groups said.

To be sure, the industry may avert a strike before the deadline arrives on Dec. 9.

The House on Wednesday passed a law that imposes the terms of a tentative agreement reached in September, but since rejected by several unions. In addition, the chamber passed a bill that would grant rail workers seven sick days each year, an increase from one sick day afforded under the tentative agreement. The Senate is expected to take up the measures soon.

If the strike moves forward, however, here’s how it would affect your finances:

A rail strike would likely increase prices for a range of goods that includes gas and food, experts told ABC News.

The price of gas has fallen 7% over the past month to a national average of about $3.50 per gallon. But a rail strike would send gas prices back upward, Patrick de Haan, the head of petroleum analysis at GasBuddy, told ABC News.

“It very likely would cause prices to rise,” he said. “It would be a major problem.”

Last year, crude oil carried on freight rails amounted to 162,000 barrels per day or approximately 1.5% of U.S. production, according to the Association of American Railroads, or AAR.

Moreover, freight rails transport 75% of new cars and light trucks, as well as 780,000 carloads of paper and lumber, the AAR said.

If a strike halts freight rail, many business will turn to trucking as an alternative form of delivery, raising distribution costs, said Ben Siegrist, the director of infrastructure, innovation and human resources policy at the National Association of Manufacturers.

“It’s supply and demand,” he said. “Spot rates for trucks would unquestionably skyrocket.”

The potential price spike would arrive as inflation already stands near a 40-year high, with year-over-year consumer price increases last month reported at 7.7%.

“It’s likely to cause some increases in prices on top of what we’re already experiencing,” Kyle Handley, a professor of economics at the University of California, San Diego, told ABC News. “It’s another shock to supply chains that are already stressed.”

If a potential strike extends from a few days to a few weeks, the effects will extend from price increases to supply shortages, experts and trade groups said.

“Initially, most products will be readily available as retailers and manufacturers have tended to increase stocks and inventories, having been scared by mistakes and shortfalls during COVID,” Joseph Schofer, a professor emeritus of civil and environmental engineering at Northwestern University, told ABC News.

“Were the strike to continue, inventories will be drawn down and the impacts will spread,” he added.

As with price increases, the shortages could affect industries like energy, agriculture, autos and manufacturing.

Zippy Duvall, president of the American Farm Bureau Federation, said in a statement that a rail strike would pose a significant challenge for food supply.

“Farmers not only rely on trains to transport food and feed, they also rely on rails to bring important supplies like fertilizer to the farm,” she said. “A shutdown or slowdown would have devastating consequences to our national and global food security.”

Eventually, a strike would bring barren shelves at retailers, Jeff Macher, a professor of strategy and economics at Georgetown University’s Center for Business and Public Policy, told ABC News.

“A strike would lead to substantial retail product shortages, increased costs to consumers and firms, and plant shutdowns,” he said.

To the relief of gift buyers, however, holiday shopping would remain largely unaffected by a strike, Jonathan Gold, vice president of supply chain and customs policy at the National Retail Federation, told ABC News.

“For the holiday shopping season, a lot of goods are moved well in advance of the holidays,” he said.

Still, the financial disruption from a rail strike adds up to more than many Americans would expect, said Handley, of the University of California, San Diego.

“When these things come up, we find out how important rail is to the American economy,” he said. “For the most part, it’s operating entirely in the background and nobody ever sees it.”