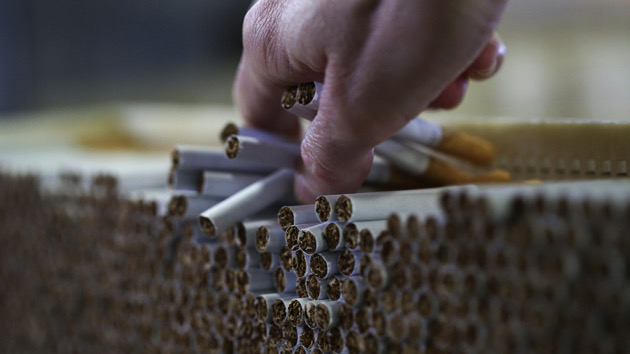 (NEW YORK) — Companies like British American Tobacco and Philip Morris International don’t typically come to mind as environmental stewards. But a new report from the World Health Organization and STOP, a global tobacco watchdog, outlines how the tobacco industry has been working to rehabilitate its image by showcasing sustainability efforts that critics claim is a form of “greenwashing.”

The term, which refers to a form of disinformation published by an organization to appear to be environmentally friendly, is a common practice in numerous industries.

“This kind of activity gives the impression that the tobacco industry is socially and environmentally responsible,” the report warns. “Yet this industry is causing an incalculable toll on health to smokers, non-smokers and farmers. And not only is tobacco harming humans, it is also damaging the environment.”

The report says its goal is to call on governments to ban tobacco industry greenwashing and to avoid partnerships with cigarette companies engaged in environmental activities that could promote the industry as an environmental partner.

The website of British American Tobacco (BAT), for example, promotes news releases with headlines such as, “BAT in Dow Jones Sustainability Indices for 20th Consecutive Year” and “BAT recognized as Climate Leader by the Financial Times.”

Philip Morris International (PMI) has a full sustainability landing page on its website that outlines everything from a low-carbon transition plan to “achieving a smoke-free future” that the company says can be done in a sustainable manner.

But critics have pointed out that many environmental, social and governance (ESG) rankings and accreditations, like the ones BAT and PMI promote on their websites, rarely consider a company’s end-product or service, in this case, ignoring the fact that tobacco products are harmful to human health, according to the report.

The report says there are more than 600 different ways to assess corporate ESG activity and there are no global, standardized disclosure requirements for companies to follow, which means businesses can edit sustainability data to promote a favorable outcome.

PMI declined to comment on the report because they said they had not reviewed it.

“Some well-funded anti-tobacco lobbying groups with strong links to WHO are committed to shutting down debate and closing doors to cooperative efforts that can drive better outcomes for the world. We take a different approach. Philip Morris International (PMI) is fully in favor of complete disclosure and encourages open and honest, fact-based dialogue with all stakeholders,” the company said in a statement to ABC News.

BAT did not immediately respond to a request for comment from ABC News.

In addition to the greenwashing examples, the report highlights the ecological impact of the tobacco industry. Annually, 32 million tons of tobacco leaf is grown globally to produce 6 trillion cigarettes, the report notes.

It takes about 22-billion cubic meters of water to grow the global crop, or the equivalent of 15-million Olympic-sized swimming pools, often in places where water is limited, the report says. It is estimated that nearly 1.5 billion acres of global forest have been lost to tobacco farming since the 1970s, according to the report.

Electronic cigarettes are no less friendly to the earth, the report says.

Among its recommendations, the report says it is calling on all governments, especially those who are members of the WHO’s Framework Convention on Tobacco Control to ban greenwashing activities. It is also calling on environmental and sustainability accreditation organizations not to endorse industry greenwashing or provide awards to the tobacco industry.

What to expect from the July jobs report

How the agriculture industry must adapt to megadrought in the West: Experts