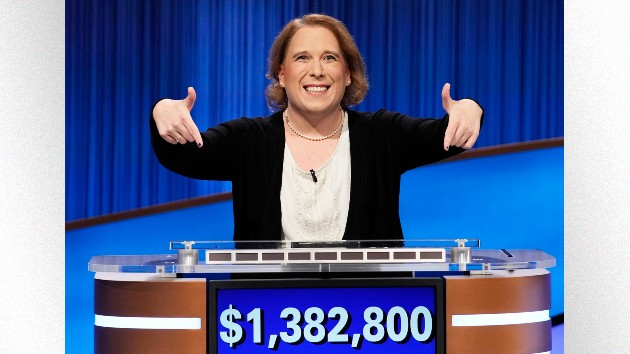 Amy Schneider‘s 40-game Jeopardy! winning streak, which began November 17, came to an end Wednesday when she lost to Rhone Talsma, a librarian from Chicago, in a competitive game. Schneider remains in second for all-time consecutive wins, only behind Ken Jennings, whose 74-game record has held since 2004.

The “Final Jeopardy!” which proved to be Schneider’s downfall was from the “Countries of the World” category. The clue read: “The only nation in the world whose name in English ends in an ‘H,’ it’s also one of the 10 most populous.” The answer: “What is Bangladesh?”

“It’s really been an honor,” Schneider said in a press release. “To know that I’m one of the most successful people at a game I’ve loved since I was a kid and to know that I’m a part of its history now, I just don’t know how to process it.”

Schneider recently told Good Morning America that her favorite part of her Jeopardy! experience was “being on TV, you know, as my true self, expressing myself and representing the entire community of trans people.”

She’ll return to compete in the next Tournament of Champions, set to take place this fall. “It’s going to be really challenging; a lot of strong players there, but it should be a lot of fun,” Schneider told GMA on returning to face fellow Jeopardy! champions.

Service, with a ‘Smile’: Inside Paramount’s home run of a guerilla marketing campaign

In Brief: ‘Jeopardy!’ spinoffs under consideration, and more

‘The Bachelorette’ recap: Gabby’s journey ends with an engagement to Erich; Zach revealed as the next Bachelor