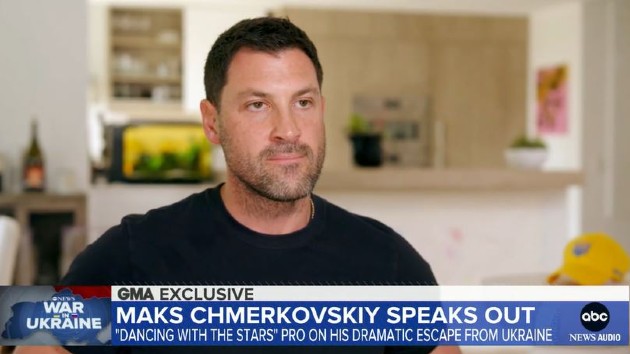 Maksim Chmerkovskiy is opening up for the first time since escaping Ukraine a week after Russia invaded the country.

The former Dancing with the Stars pro, who was born in Ukraine but immigrated to the U.S. with his family in the 90s and is now a U.S. citizen, exclusively spoke to Good Morning America’s T.J. Holmes.

Chmerkovskiy was in Kyiv filming a dance show when Russia invaded on Feb. 24. Since then — and even after arriving safely back in the U.S. — Maks has posted on Instagram about what Ukranians are going through.

“At the time of war, I realized you do what you can, right?” Chmerkovskiy, 42, said of his social media videos documenting his experience. “This was not me trying to publicize the situation. This was me trying to cry for help. I was just screaming out like, ‘…I just want you to see it, whoever you are."”

“It’s a bit surreal, to be honest,” he said. “This is a country, you know? And the country is on fire,” adding it’s  “very difficult to process.”

Chmerkovskiy, who’s married to DWTS dancer Peta Murgatroyd, said he knows he’s “going through something mentally” after what he experienced.

“I get into these crying moments. I can’t control it. I cried on the way from the airport,” he said. “I felt embarrassed the entire ride back because I was the only man on the train amongst all women and children.”

Chmerkovskiy recalled the moment he was arrested in Ukraine for breaking curfew, saying the authorities who stopped him recognized him from DWTS and let him go.

“I felt like things got real.” He recalled thinking at the time, “I’m not built for this at all. I’m just realizing that I’m not at the place where I should be.”

Chmerkovskiy escaped via a train to Poland, calling the scene at the train station “horrible.”

“After we took off, I realized that all the people that didn’t get in have to now sleep right there in that train station. It’s not heated. It’s just a giant building,” he said. “I’m dying inside because this is still, you know, very emotional stuff for me. There’s kids everywhere, babies everywhere. It’s negative temperature.”

When asked by Holmes how he feels about getting out of the country, which is still under attack from Russia today, Chmerkovskiy didn’t mince words.

‘Dancing with the Stars’ premieres tonight: How to watch and what to know