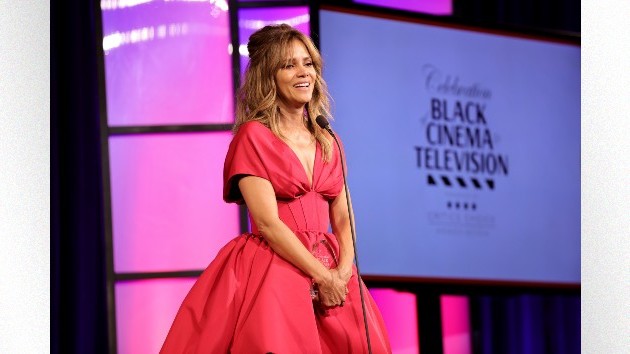 Halle Berry received the Career Achievement award Monday night at the Celebration of Black Cinema and Television in Los Angeles, and the 55-year-old actress was honored to be surrounded by accomplished Black professionals at the Fairmont Century Plaza Hotel.

“To be in this room with so many of my peers and so many beautiful people of color just fills me up,” Berry said, according to The Hollywood Reporter. “When I started 30 years ago there weren’t rooms like this where I could go and feel affirmed, esteemed. I was often alone; I was one of only a few Black people in the room searching to find my value and searching for my worth.”

In other news, Saturday Night Live star Kenan Thompson announced he’s formed a production company, Artists for Artists, and his first project is with Mike Tyson, Deadline reports. The famed boxer, his wife Kiki Tyson, and his brother-in-law Azim Spicer, will produce Mike Tyson: Undisputed Truth Part 2, a live stage tour, written by Kiki, that is a follow up to Tyson’s 2013 one-man show and HBO special.

Finally, Kandi Burruss and Kelly Price have joined the cast of the dating dramedy, A La Carte, which will debut in spring 2022 on AllBlk, according to Deadline.

Emma Thompson, Daryl McCormack go on a sex-positive journey in ‘Good Luck to You, Leo Grande’

See Ray Liotta in trailer for one of his final roles, Apple TV+’s ‘Black Bird’

“You can be the destroyer of this world…or its savior”: See The Rock in the first full ‘Black Adam’ trailer