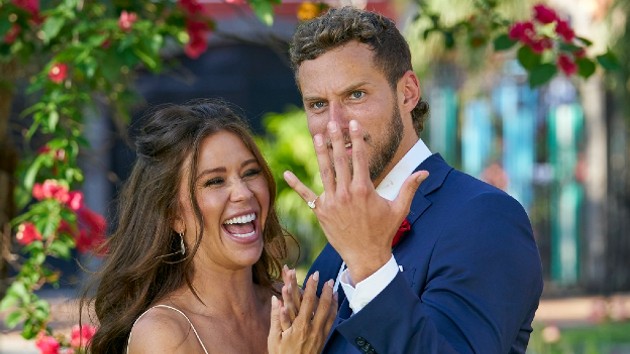 Eagle-eyed Dancing with the Stars viewers have noticed The Bachelorette season 19 star Gabby Windey, who accepted Erich Schwer‘s marriage proposal during the reality dating show’s season finale, wasn’t wearing her engagement ring on the past couple of DWTS episodes, leading to speculation all may not be well between the two.

While not in the audience for Monday’s show, Schwer did take to his Instagram Stories to encourage his followers to vote for Gabby, according to Page Six.

“She keeps on crushin it,” he captioned the screenshot of him texting “Gabby” the maximum ten times to the “DWTS” voting number.

On Monday’s episode, Gabby and dance partner Alan Bersten — who was a last minute replacement for her usual partner, Val Chmerkovskiy, who tested positive for COVID-19 — scored a 38 out of a possible 40 with their Argentine Tango, and added a 33 out of 40 for their group dance, placing them in sixth place on the leaderboard with a total of 71.

Dancing with the Stars airs Mondays at 8 p.m. ET on Disney+.

After Oscar noms, searches soar for ‘The Banshees of Inisherin’

‘The Bachelor’ recap: Zach’s journey begins with an unwanted advance from one of the ladies