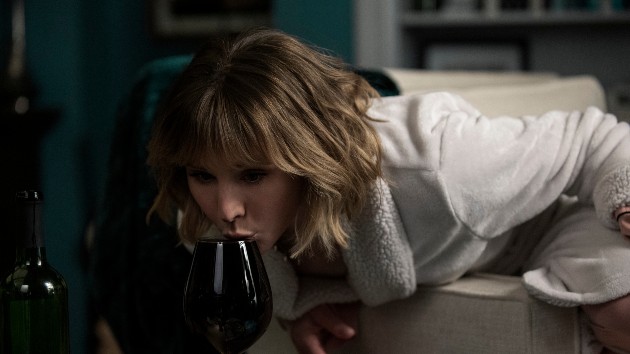 It’s not exactly clear that Kristen Bell is spoofing a previous Netflix movie, but it sure sounds like it, judging by the title of her new series The Woman in the House Across the Street from the Girl in the Window.

In a new trailer for the film, Bell certainly seems to be going through the same motions as Amy Adams in the streaming service’s 2021 release The Woman in the Window: Drinking too much, taking pills, possibly witnessing a murder from across the street — Check, check and check.

However, although the series is being described as a spoof by various outlets, the trailer plays things very straight: Nobody believes Bell’s character — and she even doubts herself — as she tries to unravel the mystery in her neighborhood as well as she can considering her booze and chemical intake.

That said, consider its creators: Bell, a comedy veteran, co-produces, along with Will Ferrell, and the show was created by Mike Tyson Mysteries alumna Rachel Ramras and Robot Chicken writer Hugh Davidson.

Check it out for yourself when all eight episodes of The Woman in the House Across the Street from the Girl in the Window debut on January 28.

Netflix premieres all eight episodes of The Woman in the House Across the Street From the Girl in the Window on January 28.

Kevin Hart and Woody Harrelson team up for the Netflix action comedy, ‘The Man from Toronto’

In brief: ‘The Bob’s Burger Movie’ gets Hulu release date, and more