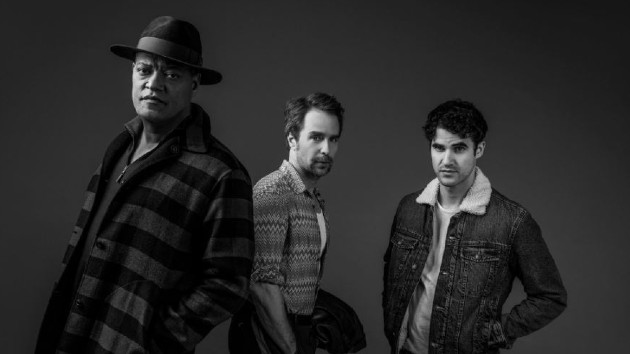 “At any point in our lives, if we have encountered American Buffalo, most actors go, ‘When can I get my hands on that?"” Darren Criss tells ABC Audio. And after a two-year pandemic delay, he’s getting his turn — with Laurence Fishburne and Sam Rockwell in the much-anticipated revival of David Mamet’s American Buffalo, now playing at New York’s Circle in the Square Theatre.

The play focuses on the hardscrabble lives of three hustlers looking to secure their slice of the sometimes-broken American Dream: Donny, played by Fishburne; Teach, played by Rockwell; and Bobby, played by Criss. It features themes of loyalty, friendship, trust, suspicion…and lots of four-letter words.

“I think this play was the first play that kind of used this kind of language and explored this kind of world,” Fishburne says, reflecting on the original 1975 production. “As young actors here in New York, we were all excited about it and the chance to do it at some point.”

Over the years, the spotlight role of Teach has been played by Robert Duvall, Al Pacino, William H. Macy, and, in the 1996 movie version, Dustin Hoffman. In 2022, all eyes are on Rockwell.

“I’m gonna go really ‘Don Knotts‘ on this one! I’m gonna go in the other direction!” Rockwell jokes with ABC Audio about his approach to the role. “We’ll see what happens you know? I’m bringing a mustache so far.”

Whatever his spin, director Neil Pepe says it’s bound to leave an impact, noting that Rockwell “has such an innate sense of what the character is, but also can grab the language and is kind of ferocious about going after it.” Pepe adds, “To have him in this role is just a gift.”

American Buffalo is now playing for a limited engagement.

Hulu orders revival of ‘King of the Hill’

Riley Keough, Sam Claflin take to the stage as ’70s rock stars in teaser for ‘Daisy Jones & the Six’

“I had no idea what I was doing”: ‘Avatar’ star Sam Worthington on losing 007 role to Daniel Craig