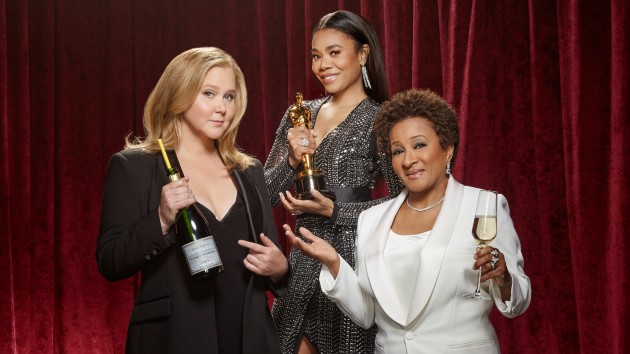 Amy Schumer, Wanda Sykes and Regina Hall kicked off the Academy Awards with a bang on Sunday night by joking that the Oscars decided to hire three women to helm the night “because it’s cheaper than hiring one man.”

The jokes continued rolling with the cameras panning to J.K. Simmons as the three joked how COVID-19 has aged Timothée Chalamet. Hall quickly interjected she’d “still smash” the 67-year-old actor.  The trio also teased Samuel L. Jackson for not being a seasoned actor, telling him his resume is missing a rom-com and musical.

When discussing the infamous snubs of the night, Sykes praised Lady Gaga and Jared Leto‘s work in “House of Random Accents” — a reference to critics taking issue with the varying accents used in House of Gucci.

Another snub, which the hosts agreed “Black Twitter’s gonna love,” was Space Jam 2 — saying they should have earned a nod for special effects “for the hair line they gave LeBron James.”

Other jokes targeted Florida’s “Don’t Say Gay” bill, with the ladies repeatedly shouting the word. They also cracked that the Golden Globes would be included in the “in memoriam” tribute this year.

The ladies finished by introducing themselves, but when it came to Hall, she quipped, “And I’m still single.”

“Who the f*** are you?” Out comic Jerrod Carmichael flames Dave Chappelle on “childish” trans jokes

Nick Cannon jokes about vasectomy with Ryan Reynolds in new ad, “Lord knows I need one”