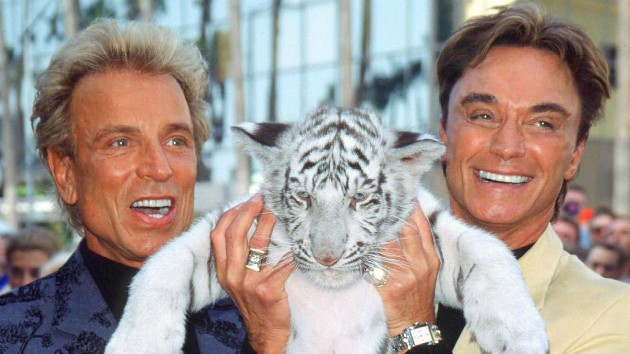 Today, a new episode of Wild Things: Siegfried & Roy dropped on Apple Podcasts. The series takes a deep dive into the titular tiger handlers, and what happened before and after a 2003 performance in which a 400-pound white tiger mauled and nearly killed Roy Horn.

The attack ended the pair’s reign as the kings of Las Vegas, but as the podcast shows, the investigation into the incident was possibly even more bizarre than the mishap — with theories ranging from a tragic accident to attempted murder.

“I think they were the most hyperbolic magicians in history, right? I mean, magic and illusions are all predicated on spectacle, but the two of them took it to another level,” Wild Things’ executive producer Steven Leckart tells ABC Audio. “To look at just their personas, the way that they dress, the music, the scale of the show, we’ve never really seen anything like that, and I’d argue we’ll never see anything like it again.”

With interviews from those who worked with the pair, and those who investigated the incident, the podcasters sought to “weave between not just the tragedy, but also just their rise and how meteoric it was,” Leckart says. “That was the goal of the series, to kind of intercut between the two and not just reduce them to a tragedy.”

A new episode of At Will Media’s Wild Things: Siegfried & Roy drops every Wednesday until its finale, February 23. “It’s about to get more wild,” Leckart teases. “Every week is going to get crazier and crazier…the deeper you go in the story and the closer you look at everything, it just became crazier and weirder and wilder and shocking, so tune in.”

Paramount revs up trailer for ‘Transformers: Rise of the Beasts’