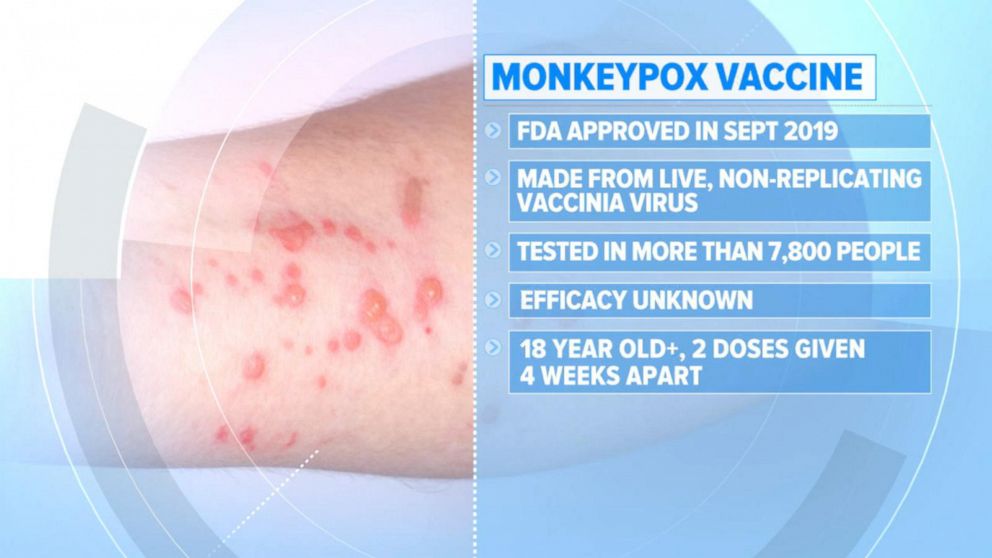 (NEW YORK) — As monkeypox continues to spread across the U.S., the number of children infected with the virus is growing as well.

At least six children have tested positive for monkeypox since July, including a child in Maine and two each in Indiana and California.

The other case was reported in an infant, a non-U.S. resident, who was tested while traveling through Washington, D.C., federal officials confirmed last month.

Children under the age of 8 are among those whom the Centers for Disease Control and Prevention considers at “increased risk” for developing more severe illness if infected with monkeypox, along with pregnant people, people who are immunocompromised and those who have a history of atopic dermatitis or eczema.

Below, experts answer seven questions parents might have about monkeypox and how it may impact kids, as overall cases across the U.S. continue to climb.

1. As a parent, how concerned do I need to be about monkeypox?

At this time in the outbreak, parents “do not need to panic” about the virus, according to ABC News chief medical correspondent Dr. Jennifer Ashton, who is also a board-certified OB-GYN.

2. How is monkeypox spread?

Monkeypox, also known as MPX, is spread primarily through direct, skin-to-skin contact between someone who has the virus and someone who does not, according to Dr. Richard Malley, senior physician in pediatrics, division of infectious diseases, at Boston Children’s Hospital and a professor of pediatrics at Harvard Medical School.

“That could be through intimate contact,” said Malley. “It could also be through just contact with somebody in the family who has an unsuspecting lesion and lesion unfortunately touches another individual.”

Shared items like towels, clothes or bed sheets could also possibly spread the virus if used by someone with a monkeypox lesion, according to Malley.

According to the CDC, monkeypox can also spread through contact with an infected person’s respiratory secretions and prolonged face-to-face contact.

“So far it does not seem to be the major mode of transmission for this virus in the current epidemic,” said Malley. “But that is of course one of the things that we need to monitor very closely.”

3. Does my family need to wipe down surfaces or avoid shared spaces like playgrounds?

Because monkeypox is spread primarily through skin-to-skin contact, parents at this point do not need to overly concerned with their child becoming infected by touching things like doorknobs in public spaces or shared toys, according to both Malley and Ashton.

“While that possibility remains, I think it does not mean that parents or anyone should be concerned about touching doorknobs or going to the grocery story or touching objects that are out on the street, for example,” said Malley. “That is not thought to be a very likely way for MPX to be spread, or for most viruses to be spread.”

Ashton said that people who live in high-transmission areas for monkeypox may want to wipe down surfaces as an extra precaution, noting, “It is possible that this virus can be left on gym equipment, just like it can be left on clothes.”

However, she added that hand washing is more important than wiping surfaces to prevent the spread of disease.

“Hand hygiene is the most important thing, not just for monkeypox but for any infectious disease,” Ashton said.

4. How can I tell if my child has monkeypox?

Unfortunately, the symptoms of monkeypox can look like other viruses — including flu and other rashes — so experts recommend seeking medical care as soon as symptoms show, especially if your child has been in contact with someone who has monkeypox.

Within one to three days of initial symptoms, those infected will typically develop a rash either on their face or other parts of the body, according to the CDC.

Per the World Health Organization, the lesions — or rash — start out as dark spots on the skin before progressing to bumps that fill with fluid.

Malley said parents should seek medical care for any type of rash on their child’s body that does not look like something they have had previously.

“The rash of MPX, as we are now learning, can look very different in different individuals for reasons that we don’t quite understand,” said Malley. “You really need to be cautious with anything that might look like a MPX rash.”

Monkeypox is diagnosed by testing the lesions to identify whether genetic material of the virus is present, according to Malley.

5. Why are children at increased risk with monkeypox?

Experts are not sure, Malley said.

It may be due to their immune systems and the fact that “younger children are sometimes more susceptible to some viral infections,” he explained.

In Africa, where monkeypox originated, the most severe but rare cases of the virus have typically involved inflammation of the brain, according to Malley.

Ashton said that while there have so far been no deaths associated with monkeypox in the U.S., it’s important to stay vigilant as the disease spreads.

“As the numbers grow, based on sheer math, it is not impossible that we will see a death here in the U.S.,” said Ashton, adding that monkeypox has a “spectrum of severity” when it comes to complications. “There have been deaths in Africa associated with monkeypox.”

6. Is there a monkeypox vaccine for kids?

The current vaccine for monkeypox is available to people ages 18 and older. However, the JYNNEOS vaccine can be offered to younger people on a case-by-case basis via a special permission process through the U.S. Food and Drug Administration to those with known monkeypox exposure.

Antiviral medications such as Tecovirimat are currently being used for treatment of monkeypox, which is available for children.

More common treatments may also be used to help treat patients who are experiencing pain due to monkeypox lesions, according to Malley.

7. How should I best protect my child from monkeypox?

The best thing parents can do for both themselves and their child, according to Malley, is to pay attention to the virus — but try not to panic.

“I think it would be very unlikely that daycare or a camp or school would be a major focus of transmission of this virus as we understand it currently,” he said. “But of course, it’s important for all of us to be vigilant.”

Malley said the key for parents concerned about monkeypox is to be aware of their child’s surroundings and not interact with people they know have been infected with monkeypox.

“The importance for parents is that if they know anybody in their surrounding, in their environment, in their family who has a suspicion of being infected with MPX, then of course that individual needs needs to isolate themself,” he said. “In general, people who have been diagnosed with MPX have been told and are being very careful because they do not want to be responsible for transmission.”

The CDC has released safety guidelines for people with monkeypox, urging those infected with the virus to “remain isolated at home or at another location for the duration of illness.”

According to Malley, monkeypox lesions are considered to be infectious until they are fully crusted over.