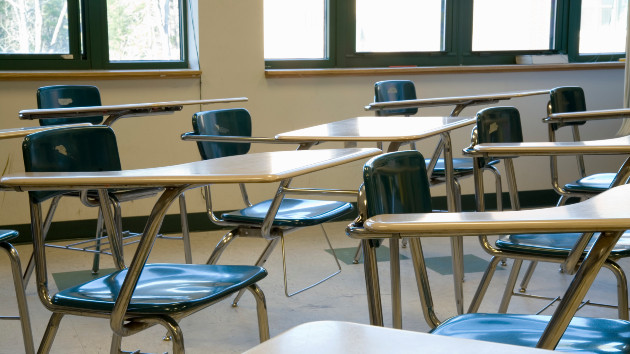 (NEW YORK) — As the United States faces a growing mental health crisis among young people, spurred on by the coronavirus pandemic, a nonprofit organization focused on mental health in schools is increasing its efforts thanks to a $15 million donation from Mackenzie Scott, the ex-wife of Amazon’s Jeff Bezos.

Scott, who has so far donated billions of dollars in her pledge to give the majority of her wealth back to society, gave the $15 million donation earlier this month to the JED Foundation, which works with high schools and colleges across the country.

The money, the largest single donation in the JED Foundation’s history, will allow the foundation to scale its work to reach over 12 million students, according to JED Foundation CEO John MacPhee.

“We’re aiming for large, wide-scale impact across the country and her gift is going to is going to help us get there more quickly,” MacPhee told ABC News’ Good Morning America. “Our goal is to triple the number of students that we are covering.”

Scott’s donation, which is unrestricted, meaning the foundation can use it any way it sees fits, comes at a time of “greater than ever” need amid the pandemic, according to MacPhee

“Students have not been in school and now they’re coming back and the schools are just overwhelmed,” he said. “You could also argue that schools are less equipped to be able to actually provide [mental health] support than they were before COVID-19, so we’re hearing just a tremendous need.”

Washington, D.C., and Idaho have one school psychologist for every 500 students, according to a report released last week by The Hopeful Futures Campaign, a coalition of organizations focused on mental health supports in schools. In some states — including West Virginia, Missouri, Texas, Alaska, and Georgia — there is only one school psychologist per over 4,000 students, according to the report.

In the last months of 2021, the U.S. surgeon general warned of a growing mental health crisis among young people, and organizations representing child psychiatrists, pediatricians and children’s hospitals declared a national emergency for youth mental health.

“I’m deeply concerned as a parent and as a doctor that the obstacles this generation of young people face are unprecedented and uniquely hard to navigate and the impact that’s having on their mental health is devastating,” U.S. Surgeon General Vivek Murthy said in testimony before senators in December.

As the rates of anxiety and depression among young people increase, schools, where young people spend most of their days, can provide a unique safety net in identifying kids who are struggling and offering support, according to MacPhee.

The JED Foundation focuses on more than just making sure schools have mental health professionals on hand. The goal of the foundation’s efforts, according to MacPhee, is to make mental health awareness and support part of the culture of schools.

“Everyone in the school, everyone in the community has a role to play to support the mental health and well-being of young people,” he said. “It’s a culture of caring where there is really no wrong door, so it is everyone’s responsibility to notice and support someone who might be struggling.”

In New Jersey, the JED Foundation partnered with a high school in need of changing its mental health culture after two alumni died by suicide their freshman year of college.

The high school, Northern Highlands Regional High School in Allendale, New Jersey, sought out the JED Foundation’s help at the urging of a parent, according to Dr. Jessica Verdicchio, the school’s supervisor of wellness and equity.

“We are a pretty high-achieving district and there’s a lot of pressure surrounding college and the kind of college that you go to and a lot of anxiety around academics and academic pressure,” said Verdicchio. “Our school community was not naïve to the fact that we have and have had challenges.”

Verdicchio said the school’s partnership with the JED Foundation came at just the right time.

“We have seen a pretty huge increase of students who are seeking out services even from last year to this year,” she said. “It’s been quite busy, just making sure that our students feel heard and feel supported, but also connecting them to other resources, sometimes outside of school, and having conversations with families and students.”

When the school started working with the JED Foundation last year, it created an interdisciplinary group of students, parents, teachers, administrators and alumni, led focus groups and conducted surveys to identify areas of change, according to Verdicchio.

Over the past year, the school has launched a speaker series for parents on topics including substance abuse and mental health. It has also trained the entire 1,300-member student body in identifying students who are struggling with mental health and knowing what to do about it, according to Verdicchio.

The school now also does quarterly mental health check-ins with each student and follows up to make sure they are connected with a counselor if they are struggling.

In addition, students formed a Wellness Club, which gives them even more of a role and a voice in mental health support at school, according to Verdicchio.

“Our students really like to have their voices heard,” she said. “They have tons of ideas on how we can continue to support the mental health of students, and I love hearing what they feel like works and what doesn’t.”

Verdicchio said that mental health awareness is now a “part of the fabric of our school.”

“With the JED partnership, what it’s allowed us to do is have a very clear vision of how this is supposed to work and make sure that not just pockets of people are trained, but that our whole staff is trained, and that we’re offering parent training and infusing language regarding mental health and how to cope and how to ask for help as part of the fabric of our school,” she said. “It’s allowed our school as a whole to feel supported.”

How to make sure schools support kids’ mental health

One of the “silver linings” of the coronavirus pandemic, according to MacPhee, is that it has sparked a greater conversation around mental health and kids, particularly in schools.

Part of the change comes from parents who should feel empowered to make sure their kids’ school is a healthy environment, according to MacPhee.

Here are four tips from MacPhee on how parents can get involved to support schools:

2. Know the mental health resources available at your child’s school, including mental health professionals on staff and trainings available to staff, students and parents, recommends MacPhee. “In addition to the academic support and the college guidance, parents should be asking about mental health supports as well,” he said.

3. Make sure the school administration supports mental health efforts. “The message to school leadership is that this needs to be a priority, and they control its success by making it a priority of the school,” said MacPhee.

4. Ask how parents can get involved. “Mental health should be a focus of the parent teacher association and other parent groups that are in the community,” said MacPhee.

Michigan health system restricts visitors under 5 due to spike in RSV, flu cases

How to beat the negative health effects of daylight saving time