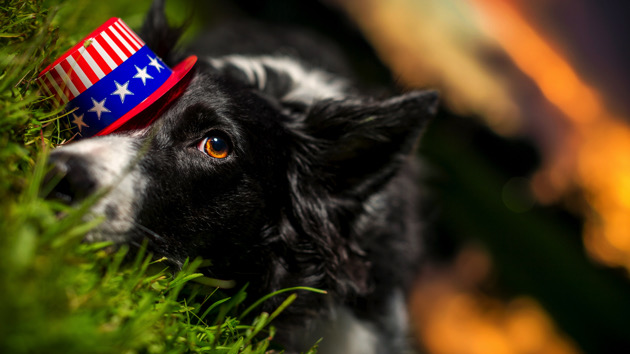 (NEW YORK) — The Fourth of July rings in the peak of summer quite literally as fireworks fly into the sky from cities to backyards alike.

While the celebration is often colorful and exciting, it is also a time that can be very loud and frightening for dogs around the country, causing it to be the weekend more pets go missing than any other time of the year, according to the American Kennel Club.

It is common for dogs to suffer from noise phobia and fireworks are usually a big trigger. The noise of fireworks causes dogs to enter survival mode, according to Kitty Block, president and CEO of The Humane Society of the United States. This can leave dogs feeling panicked, and can even cause “dogs considered to be very laid-back” to bolt from their owners and destruct their home.

“It is a logical response if you think of it from the dog’s perspective,” Block explains. “They hear extremely loud noises that often make the ground vibrate and see bright flashing lights. They don’t know it’s a holiday or a celebration, often they don’t even know where the sound is coming from, so their desire to get away or hide is understandable.”

There are some overt signs that your dog could be getting anxious, such as whining, pacing, and running away. However, dogs can also show more subtle signs of anxiousness, which can look like presenting “a general restlessness when the fireworks are happening,” explains Nick Hof, chair of the Association of Professional Dog Trainers.

The anxiety dogs have from fireworks can also be acquired over time or after a traumatic incident, which Hof’s dog, Lanie, experienced after losing her canine brother.

“One of my dogs a few years ago lost her brother and actually gained an anxiety for the Fourth of July when we no longer had her brother here as well,” Hof shares. “It took me by surprise because she had previously been totally fine.”

“When the Fourth of July came the year after, she became very panicked, would cry and whine, completely unable to settle down or relax,” Hof added.

Hof said he did everything he could to try and help her in that difficult situation, such as “turning on relaxing music to mitigate the sounds of fireworks” and “offering tasty, high-value treats” in an effort to make the experience less scary for her, which are a few of the many useful ways to ease your dog’s anxiety.

However, something unique and hopeful about this time of the year is that there is always a definite day these particular fireworks are planned to go off, which means we can prepare for it. Experts believe we have improved over time as a society with how we handle our dogs with care on the Fourth of July.

From anti-anxiety sweaters known as “Thunder Shirts” to desensitization CDs that help utilize the sound of thunderstorms, there are many different ways of dealing with anxiety in animals, said Dr. Klein, chief veterinary officer at the American Kennel Club.

There has also been an improvement in veterinary medicine with the types of medications that are offered for dogs with anxiety and noise phobia.

“We are moving away from medications that were just purely sedative and moving more towards ones that have anti-anxiety components that can help reduce the actual anxiety that the dogs are feeling,” said Hof.

Here are 6 ways to treat your dog with care on July 4 to lessen anxiety and panicking:

1. Create a sense of calmness and compete with the noise by turning on a radio or television.

2. Place a cotton ball in their ears while the fireworks go on (just remember to take them out!)

3. Stay with your pet or have a family member or friend dog-sit for the day to give them a sense of security.

4. Take your dog out on a leash when they need to use the bathroom so they are not alone and cannot run away at the noise of fireworks.

5. Play fetch with them, put on some relaxing music, and reward them with treats.

6. Most importantly, keep them far away from the fireworks show!

Hot car dangers: How to keep your kids safe this summer

Extreme heat safety tips: What to know about heat stroke vs. heat exhaustion