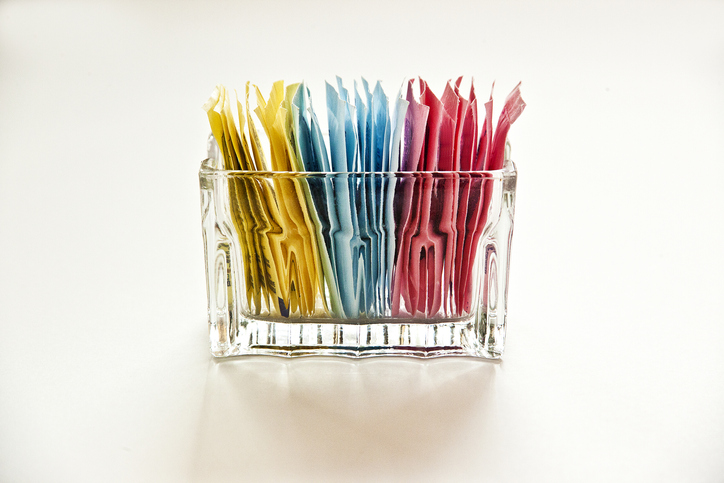 (NEW YORK) — Low-calorie sugar alternatives, which had previously been thought to be relatively harmless, may actually have a negative effect on human gut health, according to a new study.

All four substances tested in the study – saccharin, sucralose, aspartame and stevia – were found to change the gut microbiome, the collection of microbes in the gut that help protect humans against disease and enable us to digest food.

Study participants logged all of their food and physical activity using a smartphone app, and researchers took microbiome samples from the gut and mouth.

“Basically what they did is they looked at all of these sugar substitutes, things like aspartame, saccharin, sucralose, stevia,” said Ashton, who was not involved in the study. “Then they did some blood tests, they look at indicators of gut microbiome, and what they found was that saccharine and sucralose in particular increased the blood glucose, or ‘blood sugar’ level, [and] stevia increased our insulin level.”

She continued, “So bottom line here, these are not harmless or so-called ‘inert substances.’ And, again, it’s about more than whether or not they have calories like regular sugar.”

The researchers noted that previous research has shown that sugar consumption is strongly associated with weight gain, and replacing sugar in the diet with low-calorie sugar alternatives is one of the most common strategies people use to combat obesity and hyperglycemia, citing a study that showed 25.1% of kids and 41.4% of adults in the United States consumed low-calorie sugar alternatives from 2009 to 2021.

The prior study noted that more women than men consumed them as well.

Obesity prevalence can be higher depending on the location, with the Midwest and South having the highest rates of obesity, according to CDC data.

People who are overweight or obese are at an increased risk for many serious health conditions, including cancer, heart disease, stroke, high blood pressure, gall bladder disease, osteoarthritis, mental illness and other health problems.

For people whose diet is currently high in sugar substitutes, Ashton said she recommends minimizing their use, while acknowledging it can take time to do so.

“Right now we need more research to conclusively know what the impact it has on our health is, but the results of this study suggest that there is an impact on our metabolic health, and our overall health, and our gut — all important,” she said. “So, I think my recommendation would be minimize their use, don’t rely on them as a harmless, completely free-for-all when it comes to what we are putting in our foods, and take some time to re-train your taste buds.”

She continued, “That does take time but it is possible, and you can wean yourself away from that sweet tooth.”

Dr. Alexandria C. Wellman, a resident in the combined Anatomical and Clinical Pathology program at the University of California, Los Angeles, is a part of the ABC News Medical Unit.

Number of US abortions declined in 2020, CDC report finds

Measles is an ‘imminent threat’ worldwide, CDC and WHO report finds

Smoking marijuana may be more harmful to lungs than smoking cigarettes, study finds

Michigan health system restricts visitors under 5 due to spike in RSV, flu cases

How to beat the negative health effects of daylight saving time