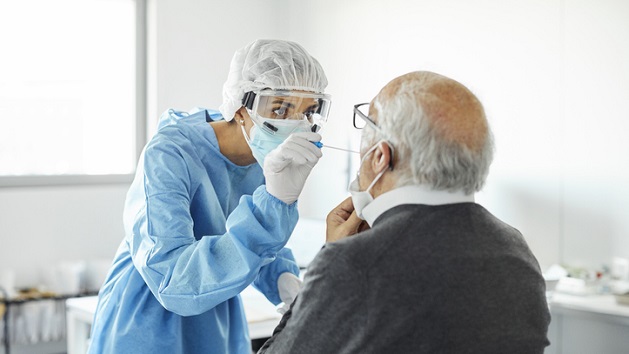 (NEW YORK) — From the onset of the COVID-19 pandemic, the elderly have borne the brunt of the virus’ deadly wrath.

Even with overall high vaccination rates in older populations, nearly three-quarters of the COVID-19 deaths reported in the U.S. have been among people over the age of 65.

Experts say the reason for the renewed surge may be due to a number of factors, including waning immunity, relatively low booster uptake compared to primary vaccination series and general vulnerability to the virus among the group. In addition, the sheer scale of the spread of the virus during the omicron wave was significantly higher compared to prior waves of the virus.

Although the number of virus-related deaths in Americans over 75 has consistently been higher than all other age groups, according to data from the Centers for Disease Control and Prevention (CDC), there were some lulls.

As the virus receded in late June 2021, and the group’s vacci​nation rate increased, the death rates for those older age groups approached levels comparable to younger people.

However, during the delta wave, in late 2021 and 2022, the disparities in death rates began to increase again with the more transmissible variant, which was better at evading vaccines. They further widened when the omicron wave hit the U.S. in the winter of 2021, a variant that was even more transmissible than delta.

Throughout the spring, overall death rates took a downturn again, as the first omicron wave receded, but as of mid-April, older Americans continue to see more deaths than younger populations.

In recent months, Hispanic Americans 75 and older have had a death rate per capita that was notably higher than other demographic groups of the same age.

Last month, the CDC announced that it is “strengthening” its recommendation for Americans over the age of 12 who are immunocompromised and those over the age of 50 receive their second booster shot.

“Only 38% of those 50 to 64 and 43% of those 65 and older have received a vaccine dose in the past six months. This leaves about 60% of older Americans without the protection they may need to prevent severe disease, hospitalization, and death,” CDC director Dr. Rochelle Walensky said during a meeting of the agency’s independent advisors in May. “We know immunity wanes over time, and we need to do all we can now to protect those most vulnerable.”

Novavax’s COVID-19 vaccine rollout off to sluggish start with just 7,000 doses in arms

New government reports on long COVID lay out existing help, what more should be done

Minorities are bearing the brunt of monkeypox cases in the US: CDC