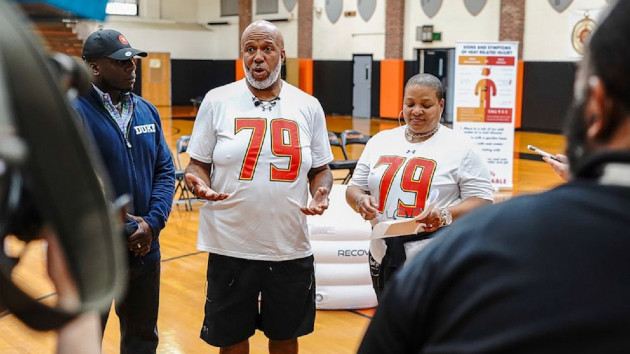 (NEW YORK) — Two parents who have turned tragedy into a teachable moment are educating others on the dangers of heatstroke.

Martin McNair and Tonya Wilson lost their 19-year-old son, Jordan McNair, in 2018 after the University of Maryland football player suffered a heatstroke following a strenuous football workout. Now, the foundation named for their son is helping others avoid the same fate.

Heatstroke occurs when the body overheats, with internal temperature rising to 104 degrees and is most likely to happen during the summer months, according to the Mayo Clinic. Older adults, people who are overweight as well as people who experience overexertion from exercise are most likely to suffer heatstroke.

“Jordan was very healthy, as far as for his weight and height, he was healthy…we were totally oblivious to what a heat-related injury was. We didn’t know what was going on,” Jordan McNair’s father, Martin McNair, told ABC News.

After Jordan’s death, his parents launched the Jordan McNair Foundation to raise awareness about heatstroke and teach parents what to look for.

“I think for us also, especially for me, my grief went into the work that we’ve done and we’re still amazed that, you know, the accomplishments and the impact that we’ve made up until this point,” McNair told ABC News.

The foundation was established in June 2018, days after Jordan died, and, since then, has started working with student athletes of all ages. The foundation’s work recently expanded to the collegiate level, partnering with Morgan University in Maryland.

Questions they wish they knew to ask in 2018.

“I wouldn’t wish this type of pain on nobody, and even though it’s been four years, it’s still felt like yesterday,” McNair said.

“I didn’t prepare him for what I didn’t know. Even though I try not to beat myself up about it, but I constantly did because it was like, ‘I could have prepared him more.’ I taught him how to be a leader, you know? How to defend himself. How to do this, how to do that; not to use drugs or substances and things like that. But at the end of the day, I never really taught him to, If you feel uncomfortable doing something, don’t do it,” McNair told ABC News.

While McNair died in 2018, heatstroke is still an issue for athletes at all levels and even tragically claimed the life of former Dallas Cowboys running back Marion Barber III in June. In July, police in the Dallas suburb of Frisco, where Barber lived, said in a statement that Barber died of heatstroke and that his death was ruled an accident.

Heat illness often advances quickly in both football players and runners, according to the Gatorade Sports Science Institute. Since 1995, on average three athletes a year have died of heatstroke.

“When you’re looking at heatstroke, the big difference is in the central nervous dysfunction. So what does that mean in layman’s terms? Basically, when people start showing altered mental status, they could be ranting hysterically, which is not their normal selves. That’s a sign of heatstroke. And all of the signs look different. But again, it’s not the normal behavior of the student athlete or the person having a heatstroke. That’s what the sign, that’s what those are telltale signs like, hey, this person, this person is usually a quiet person and now they are going on a rant,” McNair said.

Irrational behavior is one of the symptoms of heatstroke, according to the Mayo Clinic. Other symptoms could include high fever, dry, hot skin, shallow breathing, seizures and weak pulse.

According to the Mayo Clinic, it’s best to wear loose fitting clothing, drink lots of liquids to stay hydrated and to do strenuous activity during cooler parts of the day to prevent heatstroke.

McNair and Wilson hope to prevent other parents from suffering the same fate as them, and plan to have their foundation expand across the country.

“He was a gentleman. Everybody loved Jordan. And all he had to do was smile and every, any place he went he would just light up a room…He was the jokester. He just played a bunch of jokes and so on. Outside of the home, he was different, but inside the home he was a lovable guy, and some days we’d just be in the house, and be eating more than talking but just a gentle giant. That’s exactly what he was, a gentle giant, and he’s missed tremendously,” Tonya Wilson, Jordan’s mother, told ABC News.

Officials urge mask-wearing as ‘tripledemic’ grows: What parents should know

FDA warns parents not to use infant head-shaping pillows

Should parents be concerned about fentanyl in Halloween candy? Experts weigh in