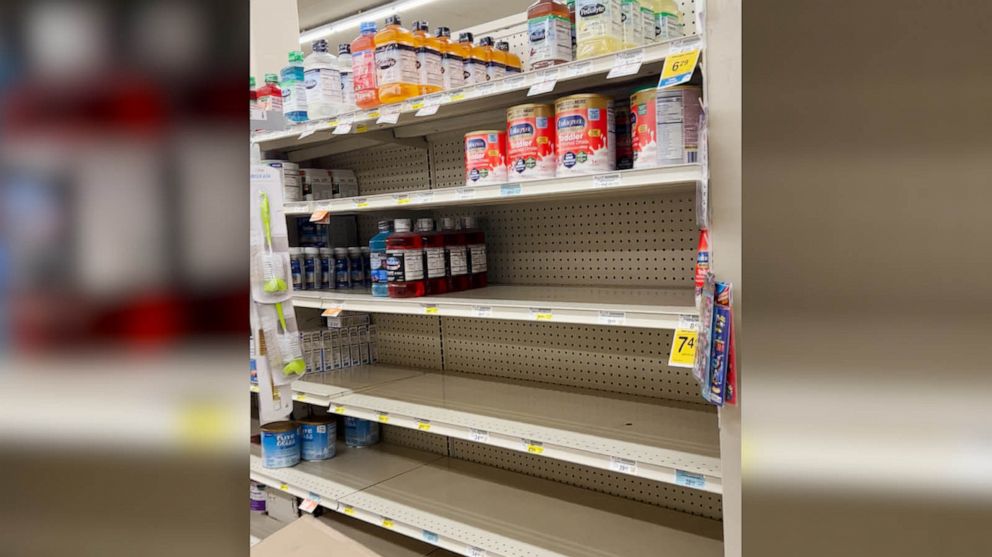 Courtesy of Mac and Emily Jaehnert

It’s an urgent issue Emily and Mac Jaehnert know all too well. Their daughter, MacKenzie, needs a special type of baby formula, Similac’s NeoSure (made by Abbott), that’s intended for babies like MacKenzie who were born prematurely.

Mac Jaehnert told “Good Morning America” he’s had to scour store after store in his local region of Richland, Washington, to try to track down much-needed formula for MacKenzie.

“Every morning, I go through and I search online for all of the stores in the area that have local inventory available,” Mac Jaehnert said. “If I see one of them, I go to that store first. A lot of times, it’s unreliable. It’s probably 50-50 at best.”

He went on, “I’ve gotten lucky one or two times where I have found NeoSure on the shelf … that is where I just start my six-store run. And I’ll do that three or four times a week. Just go and find a store and then hit as many as you can on the way home to make sure that you haven’t missed an opportunity to find this food for your kid or potentially the food that could keep your neighbor’s kid out of similarly dire straits.”

MacKenzie was born three months early, at 27 weeks, and had to spend over 100 days in the neonatal intensive care unit before she became healthy enough to go home with her parents.

Mom Emily Jaehnert said the impact of the baby formula shortage on families like hers is not something many understand.

“If you’re not in the position that us and other parents are in, it’s really hard to understand just how serious and scary it is,” Emily Jaehnert said.

Mac Jaehnert put it another way. “Imagine all of the taps in your house have run dry, and now every bottle of water is off the shelf. It’s what it feels like,” he said.

People who assume MacKenzie can be breastfed or have substitute formula are not getting the full picture, Emily Jaehnert said.

“As a mom, as a woman, as somebody who, I have pumped and produced milk for MacKenzie, but I can’t anymore,” she told “GMA.” “And even if I could, she can’t have 100% breast milk. There’s a lot of people that do not understand the complexity behind feeding a medically complicated child.”

“Typical infant formulas, the ones that aren’t made for preemies will not provide her with the essentials that she needs,” she continued. “This is something that her doctors have put her on, it is not a choice we’ve necessarily made, it is something that is basically equivalent to a medication for her.”

The Jaehnerts, who live in Richland, Washington, have been on a mission to raise awareness for what MacKenzie and other preemies are facing ever since they brought their daughter home in March.

“There should be mechanisms in place to prevent this from happening,” Mac Jaehnert said. “Because this is mission critical for keeping this kid healthy and growing and out of the hospital right now.”

“It is one of the most frustrating things I’ve ever experienced in my life,” he added. “I mean, we get this kid home, after what she’s been through … and the problem is, we can’t keep something as basic as baby formula on the shelf. It is disappointing to the point of angering.”

The couple say they’ve been able to secure enough NeoSure for MacKenzie for the time being, with the help of social media and MacKenzie’s grandfather, who shipped them some formula from Milwaukee, but tell “GMA” they know other families need critical help.

“We were lucky enough to find fellow parents on Facebook who had a preemie who had recently transitioned onto solid foods, and had a month’s supply worth of NeoSure formula that they were willing to share with us,” Mac Jaehnert said. “That was incredibly generous. So we’re doing everything we can to track things down in the area and provide it to other families in need, because I know of at least 10 families who have less than a week supply of NeoSure in this area.”

For other families in need, the Jaehnerts recommend starting with family and friends, going online and checking local resources like food banks for formula.

“There are Facebook groups that are popping up, ‘Find My Formula’ groups,” Mac Jaehnert said, but he also warned parents to be careful too. “This is very dangerous stuff, not getting it through an approved source. But you know, these are the times we’re in right now and parents are doing it if you can.”

Fifth child tests positive for monkeypox in US: What parents should know

2 new cases of monkeypox in kids reported in US: What parents should know

Twenty-two infants hospitalized due to parechovirus infection: Five things for parents to know

Poll: 43% of parents with young kids say their children will ‘definitely not’ get COVID vaccine