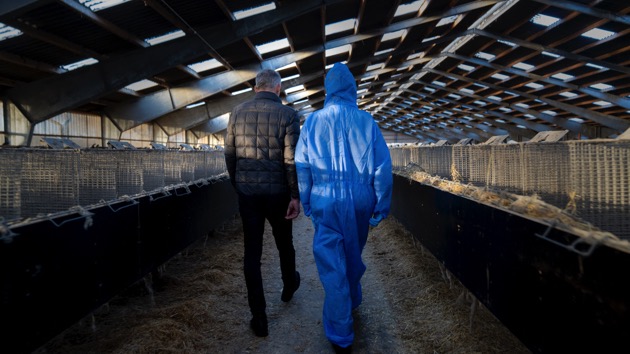 (NEW YORK) — A year ago, Denmark culled thousands of minks in an effort to slow the spread of COVID-19 in mink farms and curb any potential threat of transmission back to humans.

And just a few months ago, thousands of small animals, including hamsters in Hong Kong were culled after scientists and public health officials became concerned over cases of humans becoming infected with COVID-19 from their pets.

Pets, in particular, are problematic because there are no disease surveillance programs for them or zoo animals, said Dr. Tracey McNamara, professor of pathology at Western University of Health Sciences College of Veterinary Medicine.

While minks and hamsters have been the only animals believed to have transmitted the virus back to humans in some cases, scientists are increasingly concerned that the next coronavirus variant might emerge not from people, but animals, as COVID-19 likely did.

Scientists are monitoring animals both to try to identify any new pandemic-causing viruses, and to try to identify the next COVID-19 variant. If a new variant emerges that is significantly different from any of the variants we’ve seen previously, and if nobody has immunity — that’s effectively a brand-new pandemic.

“There are hundreds, thousands of coronavirus in many animal species,” said Dr. Jeff Taubenberger, deputy chief of the Laboratory of Infectious Diseases at the National Institute of Allergy and Infectious Diseases (NIAID). “We don’t really know where they all are, we don’t know the full extent of the reservoir. We don’t know what the risks are.”

Now, scientists are hoping to shore up defenses against COVID-19 by monitoring the way the virus circulates in animals.

“Tufts University recently received $100 million for pandemic prevention work globally,” said McNamara. “There is a lot of money going into finding potential pandemic threats in animals before they spread to people internationally, but not enough domestically.”

According to McNamara, the new Tufts funding will fund teams of scientists to bolster surveillance in the Africa and Asia — testing wild animals for any virus that might cause a future pandemic, to better understand how those viruses are circulating in nature.

In North America, scientists have found more and more cases of the COVID-19 virus being transmitted among wild white tail deer. Each case of transmission increases the chances of a new variant developing.

“If the virus is able to infect other species, it will evolve differently,” said Taubenberger. “It could give us a variant that is very different from what we’ve been exposed to, and wouldn’t be covered by our current vaccines.”

This concern for new variants arising, especially from animal populations, has scientists calling for the development of a universal coronavirus vaccine, which would address a number of coronaviruses, including COVID-19, but likely not all.

“A universal coronavirus vaccine is one that would work against multiple strains or variants,” said John Brownstein, Ph.D., chief innovation officer at Boston Children’s Hospital and a medical contributor for ABC News.

Scientists at the Walter Reed Army Institute of Research have been working on developing such a universal vaccine, which is currently undergoing the first phase of human trials.

This universal vaccine would include multiple coronavirus fragments that could trigger immune responses to different strains of COVID-19, with the hopes of boosting immunity against more variants.

It would also be stable at room temperature, potentially making it more globally accessible.

“With the omicron variant, we saw a huge number of breakthrough cases, though the vaccine was holding up against severe illness from COVID-19. In the future, we would like to be providing core support instead of chasing new variants,” Brownstein said.

Meanwhile, the U.S. government has launched a new Pandemic Preparedness Plan to better defend against new viruses that might cause the next pandemic.

As part of this plan, the NIAID will focus research efforts on two areas, “prototype pathogens” and “priority pathogens.”

By expanding knowledge of these viruses, the Pandemic Preparedness Plan hopes to shorten the time it takes to develop medicines or vaccines effective against future variants that may emerge.

Jonathan Chan, M.D., is an emergency medicine resident at St. John’s Riverside Hospital and a contributor to the ABC News Medical Unit.

Should masks return in fall and winter to prevent a COVID surge?

CDC director weighs in on whether pandemic is over, says bivalent COVID shot is ‘critically important’