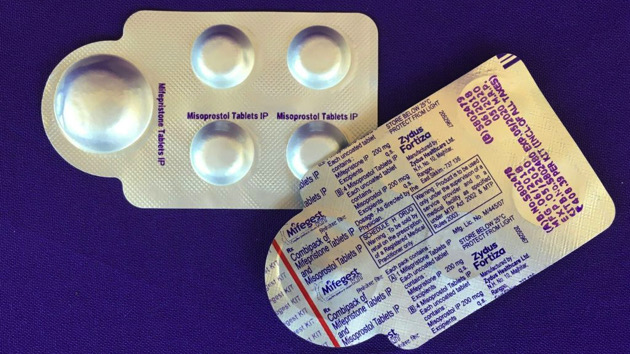 (NEW YORK) — After the U.S. Supreme Court ruled to overturn Roe v. Wade, many pregnant people living in states where abortion is now illegal are expected to turn to medication abortion, also known as the abortion pill. For now, it is still legal in most states to receive this medication by mail.

A medication abortion consists of two pills, mifepristone and misoprostol. This combination of pills can be used to end an early pregnancy, up to 10 weeks.

These medications are prescribed by a health care provider and can be taken wherever people feel comfortable. The abortion pill is one of two ways to safely end a pregnancy, the other option being an in-person procedure. In the U.S. currently, medication abortion accounts for half of all abortions, according to the Guttmacher Institute, a research group that focuses on sexual and reproductive health.

Now, with in-clinic abortion services banned or threatened in more than half of U.S. states, the abortion pill is expected to become an even more important option.

Are these medications safe?

The Food and Drug Administration and major physician groups have found these medications to be safe and effective.

“Medication abortion within the first 10 weeks of pregnancy has been demonstrated to be so safe that sonograms are no longer needed to detect ectopic pregnancies before the medication is administered,” said Dr. Jacques Moritz, a board-certified OB/GYN and medical director at Tia, a healthcare system centered around female-related care.

“Medication abortions pose no increased risk to the mother’s health nor impacts future pregnancies,” Moritz said. “Medication abortion can be likened to undergoing a spontaneous miscarriage in terms of the expected effects of the procedure.”

This medication should not be used by those with bleeding conditions, long term steroid therapy and adrenal failure, or people who have a contraceptive IUD present in the uterus.

How are these medications taken?

What should someone expect when having a medication abortion?

People undergoing a medication abortion can expect vaginal bleeding greater than normal as well as pelvic cramping and pain. The success rate of medical abortion is 95-98%.

Other common side effects of a medicated abortion include nausea, vomiting, diarrhea, fevers, chills, headache and dizziness. Typically, medications are needed for pain relief such as NSAIDs for most people.

What else are these medications used for?

Misoprostol can be used to induce labor by softening and opening the cervix in patients ready to give birth vaginally, prevents drug induced gastric ulcers and treats postpartum hemorrhage in combination with oxytocin.

How is the abortion pill different from Plan B or emergency contraception?

Emergency contraception is intended to prevent pregnancy from occurring after unprotected intercourse rather than terminating an already existing pregnancy.

Emergency contraception or Plan B is an oral medication that contains levonorgestrel, which prevents ovulation and fertilization of an egg. This treatment option does not affect existing pregnancies and cannot cause abortion.

The emergency contraception pills should not be used as a long-term contraceptive method since repeated use can cause menstrual irregularities and is not as effective as other known options, such as IUDs, depot shots and birth control pills.

What other abortion options are present?

Both medical and surgical abortions are available in both the first and second trimesters. In the first trimester, surgical abortion is called uterine aspiration and is offered up to 13 weeks of pregnancy. This procedure takes place under anesthesia, takes less than 15 minutes to complete and is greater than 99% effective, which allows for women to leave the medical center knowing their abortion is complete.

“Both are excellent options, and it really comes down to personal preference and sometimes logistics,” said Dr. Gariepy, the director of complex family planning at Weill Cornell Medicine. “We saw an increase in the number of abortions that were accomplished via medical abortion during the pandemic because of all the various health restrictions, lack of access to clinics, etc. during COVID.”

Although less common, the CDC found that in 2019, 7.2% of abortions happen in the second trimester or after 13 weeks.

In the second trimester between 13 and 20 weeks of pregnancy, a medical abortion is called an induction abortion, and is done in a hospital or clinic setting where monitoring can occur. A combination of misoprostol and mifepristone as well as anesthesia and pain medication are given, with the abortion usually taking 12 to 24 hours to complete.

Surgical abortion in the second trimester is called a dilation and evacuation (D&E). In a D&E, the cervix will be dilated with medication or dilator rods and then a suction device is used to remove all fetal tissue present in the uterus.

“The reasons someone may prefer a medication abortion is for privacy, the fact that you don’t have to have surgery, and the fact that you can take the pills at home with a loved one, and your heating blanket,” said Gariepy.

Erica Jalal, MD, is an internal medicine resident physician at George Washington University and a contributor to the ABC News Medical Unit.

Emma Egan is an MPH candidate at Brown University and a contributor to the ABC Medical Unit.

Why rape exceptions in abortion bans are more complicated in reality