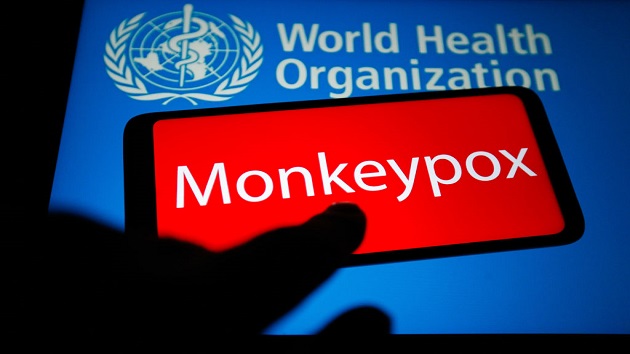 (NEW YORK) — The World Health Organization declared the outbreak of monkeypox to be a public health emergency of international concern.

At the virtual press conference, Ghebreyesus also said that the outbreak has spread around the world “rapidly” and that officials understand “too little” about the disease.

This is the seventh event declared a PHEIC by the global health agency since 2007.

More than 14,000 monkeypox cases have now been detected across the globe in more than 70 countries and territories, according to the WHO. Thus far, five deaths have been reported, all of which have occurred in Africa.

In the United States, more than 2,300 cases are confirmed or suspected in states and the District of Columbia, according to the Centers for Disease Control and Prevention. In New York, a total of 679 cases of monkeypox have now been confirmed, with the vast majority of them — 94% — detected in New York City, state officials said on Wednesday.

“I would like you to all understand that we anticipate an increase in cases in the coming weeks,” CDC Director Dr. Rochelle Walensky said during a press briefing last week, noting that with increased testing, an improved reporting system for states, and the continued spread of disease, more cases will be identified. “We know monkeypox symptoms usually start within three weeks of exposure to the virus, so we anticipate we may see an increase in cases throughout the month of July and into August.”

Prior to the outbreak, most cases occurred in countries where the virus is endemic — typically central and western Africa.

Monkeypox is generally a mild illness with the most common symptoms being fever, headache, fatigue and muscle aches. Patients can develop a rash and lesions that often begin on the face before spreading to the rest of the body.

People are typically infected by animals through a bite or a scratch or through preparation and consumption of contaminated bush meat.

However, in the current outbreak, most of the spread has come from coming into contact with infected people’s lesions or bodily fluids, making it less transmissible than other viruses such as COVID-19.

Many cases have been reported among men who identify as gay, bisexual or men who have sex with men, but there is currently no evidence monkeypox is a sexually transmitted infection — and experts have emphasized anyone can be infected.

In an effort to combat the spread of the disease, health officials are working to ramp up distribution of monkeypox vaccines.

Last week, the U.S. Department of Health and Human Services (HHS) announced that it has ordered another 2.5 million doses of the JYNNEOS monkeypox vaccine, amidst increased demand for the shots. The department’s latest order is in addition to its July 1 order of 2.5 million doses, which will begin arriving over the next year. The federal government expects to have an available supply of 7 million doses by mid-2023.

“I want to acknowledge that at this time the demand for vaccines from jurisdictions is higher than our current available supply, and we know that this is frustrating,” Walensky said last week.

Teams are “actively working” to strategically increase supply to get the vaccines to “those who need it most,” Walenksy noted.

“We got to keep going and we got to keep doing more,” Jha added. “In the days and weeks ahead, you’re gonna just see more and more.”

Think you have monkeypox? It might be another skin condition

Monkeypox and your skin: How to prevent and treat post-infection scarring