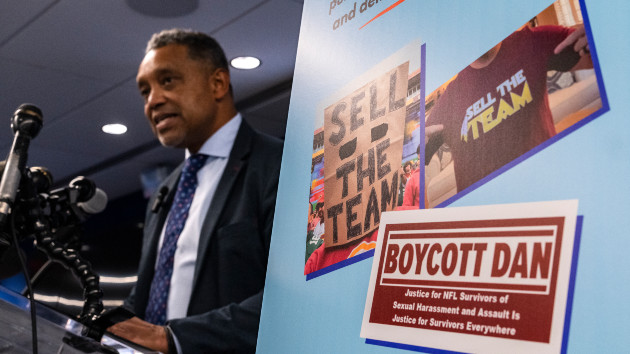 The defendants are being sued “for collusion to deceive residents of the District of Columbia about their investigation into a toxic workplace culture that impacted employees, especially women,” Racine said at a press conference.

Racine, who is leaving the office on Jan. 2, 2023, said the lawsuit will continue regardless of the team’s ownership.

Attorneys for the Washington Commanders told ABC News in a statement Thursday, “Over two years ago, Dan and Tanya Snyder acknowledged that an unacceptable workplace culture had existed within their organization for several years and they have apologized many times for allowing that to happen.”

The statement added, “We agree with AG Racine on one thing: the public needs to know the truth. Although the lawsuit repeats a lot of innuendo, half-truths and lies, we welcome this opportunity to defend the organization — for the first time — in a court of law and to establish, once and for all, what is fact and what is fiction.”

Brian McCarthy, the vice president of communications for the NFL, told ABC News in a statement that the independent investigation into workplace misconduct allegations at the Washington Commanders was “thoroughly and comprehensively conducted” by attorney Beth Wilkinson and her law firm, Wilkinson Walsh + Eskovitz.

“Following the completion of the investigation, the NFL made public a summary of Ms. Wilkinson’s findings and imposed a record-setting fine against the club and its ownership,” the statement said.

He added, “We reject the legally unsound and factually baseless allegations made today by the D.C. Attorney General against the NFL and Commissioner Goodell and will vigorously defend against those claims.”

Racine’s office began looking into Snyder’s team and the NFL in the fall of 2021 related to allegations of sexual harassment and workplace misconduct. He says his office has reviewed thousands of internal documents from the Commanders and the NFL.

The lawsuit is based on D.C.’s Consumer Protection Procedures Act (CPPA), which prohibits unfair and deceptive trade practices, Racine said. OAG has broad authority under the CPPA to hold accountable any company or any head of a company if they mislead or lie to District consumers, regardless of where they are located.

A spokesperson for the Washington Commanders told ABC News on Wednesday ahead of the scheduled press conference, “the Commanders have fully cooperated with the AG’s investigation for nearly a year. As recently as Monday, a lawyer for the team met with the AG who did not suggest at that time that he intended to take any action and, in fact, revealed fundamental misunderstandings of the underlying facts.”

The attorney general told reporters Thursday, “What Mr. Snyder sought to do is what he does all the time. Deflect attention from his own misconduct. impute a motivation or intention onto someone else.”

Coburn, who testified in February at a House Oversight Committee hearing on the allegations against the Commanders, was a former director of marketing and cheerleader with the team.

“These allegations have also been going on for quite some time,” she said. “And of course, the [House Oversight] committee has been working on this for a very long time and I have full confidence that they’re gonna come out with some sort of information for the public. That’s what they intended to do.”

Imbert, a former production manager for the team’s TV department, told reporters that the issues when it comes to workplace culture aren’t just with the NFL but with society. She says the announcement Thursday proves to her that there might be a path for accountability.

“This is bigger than the NFL. This is a societal issue. The NFL is a microcosm of society,” she said.