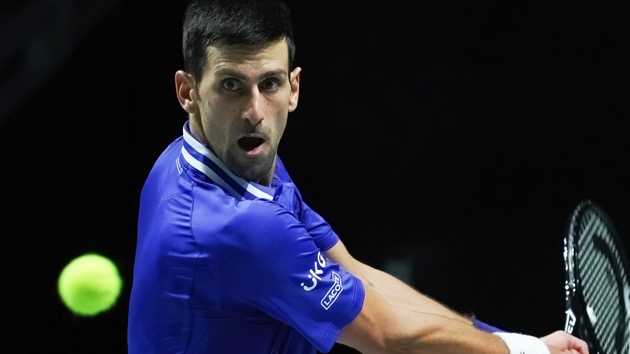 (MELBOURNE) — Fury, shock and widespread confusion unfolded on social media in Australia after tennis great Novak Djokovic announced Tuesday that he was granted a medical exemption to play at the Australian Open, which begins Jan. 17.

The announcement was mostly met with heated replies. Other social media platforms, letters-to-the-editor and talk radio in Australia were also flooded with criticism towards Djokovic, who has refused to divulge his COVID vaccination status but last year said he was opposed to it.

“We have been taken for fools,” tweeted former Australian football player Kevin Bartlett.

“Many Australians have not been able to return home for two years. There has been little free movement across borders. So regardless of your views on vaccinations, the issue is the consistent rule bending for a selected few … Grubby decision,” said Australian broadcaster Shane Anderson.

“Though we now know that Djokovic plans to play the #AusOpen, there will still be considerable speculation about the legitimacy of his exemption. What “acute major medical condition,” as listed here by Australian authorities, could a healthy #1-ranked athlete have?” said journalist Ben Rothenberg.

There were some voices of support from his Australian fans — after all, Aussies are a sporting nation and he is one major away from breaking a tie with Roger Federer and Rafael Nadal, who also have 20 grand slam singles titles. But he would do it in a city that has mixed feelings about the tennis star.

Omicron cases have exploded in Australia in recent weeks since domestic borders were opened, and Victorian residents have suffered some of the strictest COVID controls in the world over the past two years. More than 90% of Australia’s over-16 population is fully vaccinated, but some people still cannot travel internationally or interstate because of the measures.

Deputy Victorian Liberal Leader David Southwick called the exemption decision “a disgrace” and a “kick in the guts” to residents.

Prominent Australian emergency physician and former president of the Australian Medical Association Stephen Parnis said the exemption sends the wrong signal to others who have sacrificed to stop COVID.

“I don’t care how good a tennis player he is. If he’s refusing to get vaccinated, he shouldn’t be allowed in … If this exemption is true, it sends an appalling message to millions seeking to reduce COVID-19 risk to themselves and others. Vaccination shows respect, Novak,” Parnis said.

Organizers said the defending champion has not been given special status, and insist exemptions are decided by a group of independent doctors on a panel, which makes a blank medical assessment based on whether a candidate has had major surgery, an adverse reaction to a COVID vaccine or if they are in recovery from the virus. Defending the process, Tennis Australia CEO Craig Tiley said, “no one knew who the applicant was.”

The Australian government said it’s not up to them to decide who gets granted exemptions — saying it’s a matter for the Victorian government, which hosts the tournament each year.

Speaking ahead of Djokovic’s arrival in Melbourne, Prime Minister Scott Morrison said Djokovic would not be treated differently from anyone else.

“There should be no special rules for Novak Djokovic at all. None whatsoever,” Morrison said.

“If that evidence is insufficient, then he won’t be treated any different to anyone else, and he’ll be on the next plane home.”