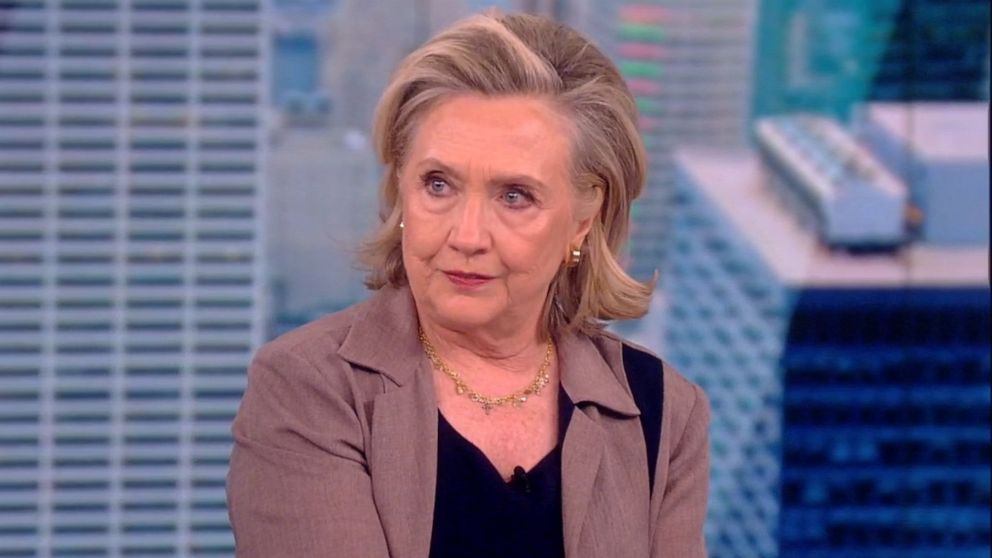 (NEW YORK) — Hillary Clinton expressed her concern over the classified documents seized at former President Donald Trump’s Mar-a-Lago estate last month, sharing a warning that “every American” should be concerned.

On Wednesday, the former secretary of state joined “The View” alongside daughter Chelsea Clinton to share about their new docuseries, “Gutsy” on Apple TV+ premiering on Friday. Before delving into their new show, which highlights some of America’s biggest heroines, they weighed in on one of the nation’s hottest topics: the FBI’s search of Trump’s Mar-a-Lago home and the documents found at the residence.

The FBI executed a search warrant for Trump’s Mar-a-Lago home on August 8. According to the inventory list unsealed Friday by a federal judge, agents gathered more than 11,000 documents or photographs without classification markings that were described as property of the U.S. government.

Hundreds of the documents retrieved during the search were considered confidential, secret and top-secret documents, as well as more than 40 empty folders with either “CLASSIFIED” banners on them or labeled “Return to Staff Secretary/Military Aide.”

ABC News previously reported that the FBI remains concerned about classified records that could still be missing even after their search of Mar-a-Lago.

On “The View,” Hillary Clinton said the seized documents from Mar-a-Lago “should be taken really seriously.”

“It should concern every American, because those documents and the empty folders as they were marked suggest that there was really important secret information that is essential to our country’s defense and security,” she said.

Clinton went on to explain how classified documents were securely shared with her during her time as secretary of state under former President Barack Obama from 2009 to 2013.

“A military courier would come into my office. It would be an emergency. There wouldn’t be time to get to the White House and have an emergency meeting in a SCIF,” she explained. “Usually a man — it was always a man, I remember — walked in, he would have a briefcase locked to his wrist.” A SCIF is a U.S. government–approved secure facility where sensitive information can be looked over by government officials.

“He would come into my office and he would say, ‘You have to look at this immediately, secretary.’ He would unlock the briefcase; he would stand there; he would give me this document that had really delicate, secret information about something of importance,” she continued. “I would read it, then I would sign that I read it. It would go back into the locked box attached to his wrist and off he would go.”

With that knowledge, Clinton was left puzzled as to how sensitive documents could be moved at all. “I don’t understand how [Trump] was permitted to take them, even to the residence, let alone to a country club in Florida,” she said.

Clinton went on to say that the country doesn’t have a clear understanding of what was in the seized documents, but reminded viewers on the daytime talk show that “people literally die to get our government information. They go to prison. They get exiled.”

“The idea that this would have been done, I hope everybody takes really seriously,” she added.

On Monday, U.S. District Judge Aileen Cannon granted a request from Trump’s legal team to appoint a special master to review documents seized in the FBI’s Mar-a-Lago search. The judge’s order halts all reviews of the documents by the Justice Department in its criminal investigation.

When co-host Joy Behar asked Clinton if Trump should be indicted over the documents found in his Mar-a-Lago estate, she said that she didn’t want to “prejudge.”

“I have been prejudged wrongly enough. I’m not going to judge somebody else, and so I think the key is what the facts and the evidence are, what the FBI and the intelligence community learn about these documents, how they ended up there, who else saw them,” Clinton responded.

She went on to explain how the public should have “two minds” about the investigation. “No one is above the law, and the rule of law in a democracy … has to be our standard.”

The public “should not rush to judgment,” Clinton continued, but “we should be concerned about it, and we should follow the facts and the evidence.”

Chelsea Clinton also weighed in on South Carolina Sen. Lindsey Graham claiming political violence would break out if Trump were to be indicted over mishandling of presidential records.

“I’m very worried about our country,” she said. “Sen. Graham and others … should know better and should be more responsible with their platforms.”

“After the white nationalist insurrection at the Capitol on January 6, we know that there are people who believe that violence is an acceptable tool, even in our democracy, even in the 21st century in the United States of America,” she continued.

“I’m very concerned and I’m very disappointed in the senator,” Chelsea Clinton said. “I hope that others do not follow his lead.”

Every episode of ABC’s award-winning talk show “The View” is now available as a podcast! Listen and subscribe for free on Apple Podcasts