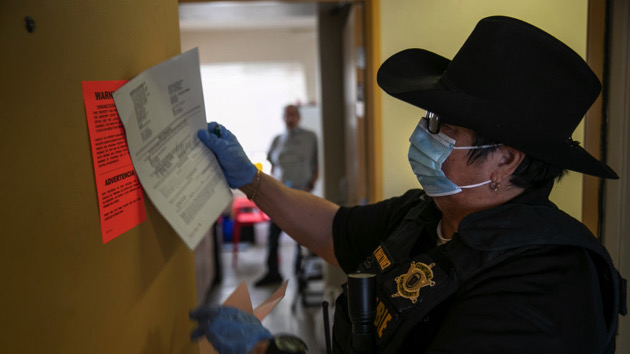 (WASHINGTON) — When the Supreme Court struck down the Centers for Disease Control and Prevention’s federal eviction moratorium in August 2021, experts and politicians predicted that expulsions would soar.

But eviction filings overall remained well below the historical average through 2021, according to the White House and housing experts.

“[Eviction filings] increased after the CDC moratorium ended, but they still aren’t anywhere near back to normal,” said Peter Hepburn, Princeton Eviction Lab statistician and quantitative analyst. “So we’re still at 60% of the historical average.”

Hepburn credited the influx of state and federal resources and ramped up legal assistance implemented during the coronavirus pandemic for the downward trend.

While some financial resources started during the pandemic outlasted the eviction moratorium, Attorney General Merrick Garland on Aug. 30, 2021, also called upon lawyers and law students to help fill the gap after the moratorium ended by helping with Emergency Rental Assistance applications, volunteering with legal aid providers and assisting courts with implementing eviction diversion programs, among other initiatives aimed at increasing housing stability.

Heeding that call were 99 law schools in 35 states and Puerto Rico, according to the White House.

“Over the past five months, over 2,100 law students dedicated over 81,000 hours to serve over 10,000 households,” said a statement released by the Biden administration.

Gene Sperling, the senior adviser to President Joe Biden who is spearheading the implementation of the American Rescue Plan, said the partnership with the legal community has been an “extraordinary national experiment.” The project — part of an “whole-of-government approach” — contributed to eviction diversion programs as well as rental assistance programs that kept eviction filings significantly below historic averages.

Funding worth $46 billion for the Emergency Rental Assistance Program — provided for households economically impacted by COVID-19 — also flooded the system at the same time these partnerships were emerging.

David Daix, a 45-year-old immigrant from the Ivory Coast and father of two residing in Henrico Country, Virginia, is one beneficiary of a newly beefed-up partnership between the Virginia Poverty Law Center’s eviction legal helpline and the University of Richmond School of Law.

After being let go from his customer service job in March 2020, Daix was unable to pay rent after his unemployment benefits expired a year later. His landlord filed for eviction in January 2022, he said. The helpline put him in touch with Central Virginia Legal Aid Society, which got his case dismissed in early February.

Daix is not alone. Richmond, Virginia, and its surrounding counties — Henrico and Chesterfield — have some of the highest eviction rates in the country, according to Princeton’s Eviction Lab.

These regions had a stark “access to justice” gap between represented and unrepresented individuals in court. From 2015 to 2019, only 1% of tenants in Richmond, Henrico and Chesterfield were represented in local general district courts, according to the 2017 Virginia Self-Represented Litigant Study.

In 2020, tenant representation in housing court increased by 11% while 30% fewer landlords were awarded judgments, according to the RVA Eviction Lab. Four years ago, the Central Virginia Legal Aid Society didn’t have a single attorney who was practicing full-time housing law; now it has six.

“A new generation of housing advocates have been born out of this time,” Erika Poethig, White House adviser on Urban Planning and Policy, said at an eviction prevention event at the end of January.

The program began after the Biden administration reached out to Georgetown Law School Dean Bill Treanor, who spearheaded the partnership between law schools and the White House along with NYU Law School Dean Trevor Morrison.

Treanor said one of the most important legacies of the project is a renewed commitment to eviction prevention, and the White House and Department of Justice have said they intend to maintain the law school partnerships after the pandemic ends.

“Even after the pandemic is over, the underlying housing crisis will endure. This has helped make us all conscious [of] the importance of finding ways in which law students can help people facing housing crises,” Treanor said.

As part of the program, the University of South Carolina School of Law — located in Columbia, the city with the eighth-highest eviction rate in the country — helped fund Veterans Legal Clinics that serve indigent veterans with housing issues. The school also partnered with the NAACP housing navigators program.

Angela Onwuachi-Willig, dean of Boston University School of Law, said tenants often do not have access to legal assistance and don’t know how to fight an illegal eviction, especially during a pandemic.

“[Tenants] have no way of getting it back, they have no way of fighting against a landlord who has used something that’s improper,” Onwuachi-Willig said. “And imagine and during all of that, during a pandemic, when you’re also trying not to get sick.”

Onwuachi-Willig partnered with Naomi Mann, clinical associate professor, and Jade Brown, clinical instructor in the Civil Litigation and Justice Program, last spring. Brown helped develop the MA Defense for Eviction (MADE) for students to help tenants respond to initial complaints filed by landlords against them and generate pleas based on tenants’ answers.

“Hopefully, the pandemic has sort of revealed the cracks in our system, and where they are. It has certainly shown us how enormous the unmet need is, when it comes to housing law, the unmet legal need, in particular, is what we obviously are working on,” Mann said.

Students did not need to have a background in housing law to participate and, according to Brown, the project had a “profound” impact on many of them.

“Being able to work with Naomi and Jade on this definitely solidifies this is something that will be a part of my career for a long time,” said Julian Burlando-Salazar, a Boston University law student who was not previously planning to pursue housing law.

The movement toward getting tenants better representation in court was already underway in many states before the pandemic began.

Three states — Washington, Maryland and Connecticut — have enacted laws that require no necessary qualifications for tenants facing eviction to be eligible for free legal representation.

Eleven states have established a qualified right to counsel, including New York, where the state’s eviction moratorium ended on Jan. 15, 2022. That same day, Ciji Stewart was scheduled to appear in court and requested a lawyer from the Legal Aid Society.

Stewart, a mother of three living in Rockaway Beach in Queens, received a call from Sateesh Nori, the attorney in charge of the Queens Neighborhood Office of the Legal Aid Society.

“I was just telling Nori everything that was happening in my home and he got me an adjournment, which I didn’t know what was or could happen,” Stewart said. “He helped me file a suit for repairs against the landlord.”

Because she lived in New York, Stewart may have already qualified for legal representation. But since the federal program was developed, many more like her in other states have now begun to feel the same relief.

But while University of Richmond Law School Dean Wendy Perdue said the program represents progress in that it has helped show the necessity of legal representation, she said it’s still just a “drop in the bucket.”

“The Association of American law schools has collected the data nationwide — literally millions of hours of service that law students around the country provide,” she said. “It’s still only a drop in the bucket, but the only way you fill up the bucket is with a series of drops and so law students are having an important impact in filling some of the gaps that exist in legal services.”