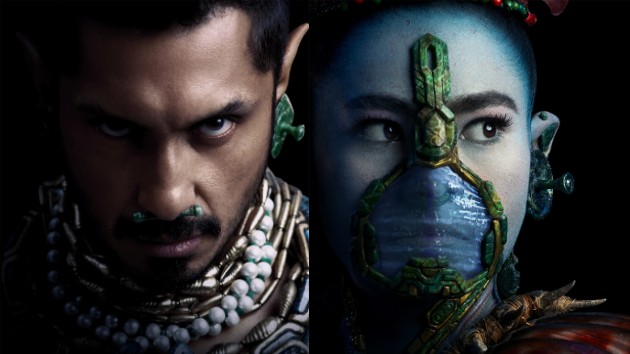 While the original Black Panther was hailed for bringing Black heroes to the forefront, its hit sequel, Wakanda Foreveris earning praise for a change of its antagonist’s origin to highlight Meso-American heritage.

Namor was one of Marvel Comics’ first characters back in 1939, and although he predated DC Comics’ Aquaman, Namor’s reign as the King of Atlantis was preceded in theaters by Jason Momoa‘s movie of the same name.

So director Ryan Coogler and Marvel Studios’ producer Nate Moore and president Kevin Feige reimagined Namor for Wakanda Forever as being the ruler of the Aztec-themed underwater world of Talokan. This meant more representation for actors of color, specifically Mexican-born Tenoch Huerta and Mabel Cadena, who respectively played Namor and his cousin and advisor, Namora.

Cadena gushed at a recent press event, “As a Mexican woman, a Latin American woman it’s like, ‘Oh my God, this is amazing!’ I’m very proud to be part of something like this, because it’s not just a superhero movie, you know?” She added, “Before, I never thought I could be a superhero. And now thanks Black Panther, thanks Ryan, Thanks Kevin, Nate. Lupita [Nyong’o], Letitia [Wright], Danai [Gurira], Chadwick [Boseman], I have this new opportunity to believe in me…!”

Huerta said changing Namor’s origins was “a fantastic move,” adding, “I hope this helps the people to embrace who they are, who we are. You know? [Everybody can] look at the mirror and see what is in the mirror is okay.”

The actor explains, “You know…almost everybody in Mexico is has indigenous or African roots. It’s about culture. You know, so culturally we are a part of indigenous roots. So [we now can] embrace those roots, and honor these two main sources.”

Marvel Studios is owned by Disney, the parent company of ABC News.