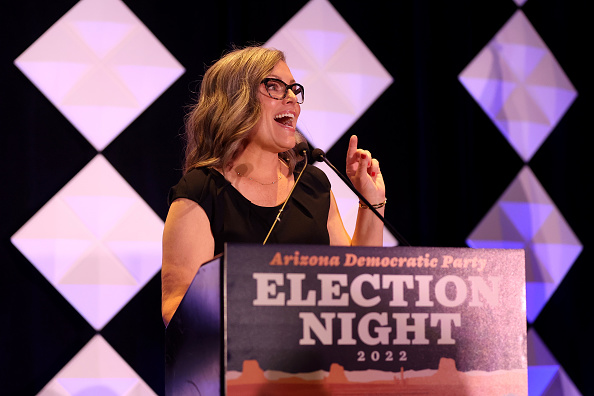 (PHOENIX) — Democrat Katie Hobbs is projected to win her race against Republican Kari Lake, ABC News reports, flipping the Arizona governor’s seat for the first time in more than a decade as voters across the nation appear to have delivered a stunning rejection of election deniers and extremists in midterm contests.

After her projected victory, Hobbs said in a statement, in part: “I want to thank the voters for entrusting me with this immense responsibility. It is truly an honor of a lifetime, and I will do everything in my power to make you proud. I want to thank my family, our volunteers, and campaign staff. Without all of your hard work, passion, and sacrifice this night would not be possible. Thank you from the bottom of my heart.”

“For the Arizonans who did not vote for me, I will work just as hard for you – because even in this moment of division, I believe there is so much more that connects us,” she said, adding, “Let’s get to work.”

Hobbs, the incumbent secretary of state, cast her matchup with Lake as a choice between sanity and “chaos.”

“Do we want to elect a governor whose entire platform boils down to being a sore loser — or a governor who’s going to get the job done for Arizona?” Hobbs said on the campaign trail, calling Lake her “election-denying, media-hating, conspiracy-loving, chaos-causing opponent.”

Hobbs served eight years in the Arizona Legislature before being elected secretary of state and gaining prominence in 2020 with her defense of Arizona’s voting system against a barrage of baseless fraud accusations that then-President Donald Trump and his allies thrust in the national spotlight. This heightened profile helped her sail through the Democratic primary, but polling had shown her statistically tied with — if not behind — Lake leading up to the election.

“It’s called ‘battleground’ for a reason,” Hobbs would say of their race.

Lake, among Trump’s favorite endorsees, left her job as a local TV news anchor last year, citing discontent with the media, and months later announced a bid for governor, saying God and Arizona voters called on her to run. Lake pitched herself as “ultra MAGA” and a “mama bear” fighting for the “Arizona First” movement, and she said her first act as governor would be to declare an invasion at the southern border.

“I welcome the attacks, and I welcome every bit of it with ultimate gladness,” Lake said on the heels of her primary win. “Because this fight before us proves to us that God is with us. He has chosen me, and he has chosen you.”

Lake embraced Trump’s attacks on the election he lost. On the stump, she often called President Joe Biden “illegitimate” and said she would not have fulfilled her legal duty to certify his win in 2020. If elected governor, she said she would sign legislation to eliminate electronic counting machines and move to “one-day voting” in the state where voting by mail is a popular option.

“When people tell me what’s the top issue in Arizona, I say, ‘OK, border’s big, the economy’s big, inflation is a problem, our election integrity’ — but what’s really going to get us to the polls, us mama bears and papa bears, is what they’re trying to do to our kids,” Lake said on election eve, leaning into social issues and attacks on “gender confusion.”

Given her embrace of election denialism, Lake is not widely seen as a candidate who will accept her defeat after all the votes are counted.

Asked last month if she would concede her race if she lost, Lake told ABC News Chief Washington Correspondent Jonathan Karl that she would — “if we have a fair, honest and transparent election.”

During the campaign, Lake repeatedly called on Hobbs to recuse herself as secretary of state, insisted she was “not losing to Katie Hobbs” and recently hired Republican National Committee attorney Harmeet Dhillon as her team continues to weigh legal challenges to the vote.

Lake had also suggested foul play in the primary election before she won. “We outvoted the fraud,” she declared at the time.

Hobbs is the third statewide Democrat whom ABC has projected will win their midterm race this year, after Sen. Mark Kelly and Adrian Fontes, who will succeed Hobbs as secretary of state. While the Republican ticket more often than not campaigned together, the Democrats regularly appeared separately, despite a coordinated campaign under Mission for Arizona, raising questions about unity on the ticket.

Hobbs faced criticism from pundits and voters alike for refusing to debate Lake, with Lake calling her a “coward,” but she maintained she wouldn’t engage with Lake and “make Arizona the subject of national ridicule.”

Laurie Roberts, a columnist for The Arizona Republic, called Hobbs’ refusal to debate Lake “a new level of political malpractice.”

“This is two candidates, each asking to govern a state of more than seven million people for the next four years. Voters have a right to see them, side by side,” Roberts wrote. But that opportunity never materialized.

Lake also highlighted accusations of racism and sexism against Hobbs, citing a winning lawsuit filed by Talonya Adams, a former staffer in Hobbs’ state Senate office who was fired. Hobbs said last year, about Adams, “I can say with certainty on my part, my decision in the termination was not based on race or gender. There were other factors.”

‘Not a Trump state’

Hobbs chose to run a largely low-key campaign when compared to Lake’s rallies and moderated Q&A events, which turned out hundreds. Like Trump, Lake also embraced — and often sparred with — the press.

But Trump also drew massive crowds in the Grand Canyon State — and, notably, lost in 2020 to Biden by more than 10,000 votes.

And there were prominent names that campaigned against Lake. Outgoing Rep. Liz Cheney invested in TV ads in Arizona, clipping Cheney saying during a Q&A at the McCain Institute at Arizona State University, “I don’t know that I have ever voted for a Democrat — but if I lived in Arizona now, I absolutely would. And for governor and for secretary of state.”

Former President Barack Obama weighed in too, saying that being governor “is about more than snappy lines and good lighting.”

“Katie, she may not be flashy,” Obama said at a rally with Democrats earlier this month in Phoenix. “She could have been. She just chooses not to be, because she’s serious about her work.”

Barrett Marson, a GOP strategist in Arizona, tweeted Friday after Kelly defeated Republican Blake Masters, “Arizona is a conservative state but not a Trump state. And voters keep telling us that.”

Marson predicted Hobbs would win in a state where a third of registered voters are independents because moderate GOP and right-leaning independents “couldn’t stomach” Lake, he said. “And of course, they listened to Lake who proudly said she was driving a stake in the heart of McCain republicans. Looks like the foot’s on the other shoe.”

Ducey had said that Lake was “putting on an act,” calling her “Fake Lake,” but he ultimately supported her bid after her primary win.

Lake made border security her top issue, alongside election integrity. She repeated lines from Trump’s winning 2016 presidential race, calling migrants who come across the border “known terrorists … murderers and rapists” while often tying herself to his thinking. “I know President Trump said that many, many years ago. That’s a fact,” she said at a “Faith and Family” festival.

While she struggled to articulate her own plan for the border, Hobbs blamed inaction from both parties in Washington and warned that Lake’s plan at the southern border would “bring untold levels of chaos into our state.” The top issues on her stump included public education, water management and housing affordability.

Her campaign picked up momentum in September, when a pre-statehood, near-total ban on abortion took effect in the wake of the Supreme Court overturning Roe v. Wade. Hobbs and state attorney general candidate Kris Mayes hit the trail together to say they would not enforce any bans on abortion in Arizona, unlike their opponents.

Asked by ABC News last month if she would support legislation that protected abortion until viability, following the guidelines of Roe, Hobbs said she didn’t want to “talk about hypotheticals.”

“The reality is right now that Arizonans are living under an extreme ban at 15 weeks or the possibility of an entire ban, and we need to focus on making sure that Arizonans have access to safe legal abortion,” she said. “And that’s what I’ll do.”

Lake was rumored to be a potential 2024 vice-presidential pick if Trump were to win the Republican nomination, but it’s unclear what her political future holds with her projected loss in the governor’s race.

Because Arizona is one of five states without a governor’s mansion, Hobbs will likely continue to reside in the greater Phoenix area, with her husband, Pat, two children and their dog, Harley.

How does the Biden classified documents matter compare to Trump’s?