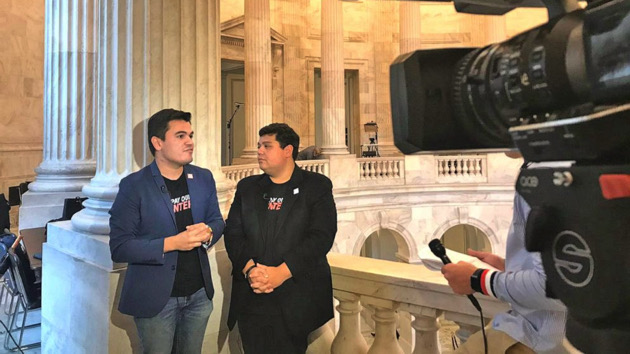 (NEW YORK) — On hot days, some over 100 degrees, workers spend hours harvesting fruits and vegetables for very little money — produce that ends up on kitchen tables of people across the country.

Tens of thousands of these workers have experienced heat-related injuries and hundreds more have died from heat, all while earning an average of $25,000 to $29,999 per year in one of the most hazardous jobs in the country, the Economic Policy Institute found.

The workers, a majority of whom are Latino and undocumented, are in a constant battle for fair and safe labor practices.

However, the labor rights movement transcends industries, though it may look quite different for others.

And in local and federal government agencies, interns have been at the center of a debate about unpaid labor.

It wasn’t until recently that some government offices have begun paying their interns, which has created a new pathway for people from lower-income households to support themselves while gaining entry-level experience in policy and politics.

Pay Our Interns, created and spearheaded by two Latinos, fueled this change through their advocacy on Capitol Hill.

Latinos have been a major force in the labor rights movement for decades, with icons such as Dolores Huerta, Cesar Chavez, and Emma Tenayuca as the leaders of the fight.

The bill would make it easier for workers to vote for a union,, without intimidation from supervisors, foreman and labor contractors. Farm workers say that voting, as it is now, discourages participation in union efforts.

“Currently, the only way that they do it is in person, at the premises of the employer, where the supervisors are looking over their shoulders, where they hire security, where, in many cases, immigration has been called and farm workers have been deported,” said Teresa Romero, the president of the labor union United Farm Workers.

However, Newsom has expressed concerns about the bill.

Farmworkers face challenging workplace conditions, including low pay, unsafe conditions, and very few if any protections against abuse or misconduct.

Romero, who leads the organization, says many undocumented workers pay taxes, but can’t collect social security and can’t retire. Some are left working long hours for years past the average retiring age.

“They work and feed us all,” Romero said.

She continued, “They move from crop to crop, moving their children from city to city to be able to support their family. And if we knew that, all of us would be willing to pay a little more for our food, just so these people have the respect, dignity, and the pay that they deserve.”

Without them, she says, we wouldn’t have food on our tables.

Romero urges people to be conscious of where they buy their food, how workers are represented and how they’re protected. She said the fight for fair working practices shouldn’t stop and end with farm workers themselves. She said their labor fight is a collective fight.

“This is not just manual labor,” she said. “These are professionals who know exactly what to do when to do with different crops.”

Fighting for fair labor conditions in the office

“Our society got too comfortable with unpaid labor,” says Carlos Mark Vera, a co-founder of Pay Our Interns.

He and Guillermo Creamer Jr. created the group to put an end to unpaid labor primarily in the public service space. Before 2017, Pay Our Interns found that only 10 percent of congressional interns were paid.

The organization has since worked with Congress to allocate $48 million for lawmakers to pay their interns.

“Since then that fund has actually been growing each year, which is unheard of, you know, usually programs don’t increase that quickly,” said Vera. “Now that we have Congress invested in this, and they’re very supportive of this, we’ve leveraged that for other ones. So this past year, we secured funding for White House interns, State Department interns for the first time in history.”

Unpaid internships push low-income or financially strained students out of the running to gain experience.

Unpaid internships often force students to choose between finding a job that pays their bills or paying for an internship out of their own funds – since Vera says that internship expenses like traveling or supplies often come from the intern’s wallet.

This primarily affects Black and brown students, and makes it harder for some students to enter certain fields if only unpaid internships are available.

“How do you grow wealth in this country? A lot of times, it’s just entering through professional pathways. But when there’s a price to participating in these opportunities … We know that many Black and brown families cannot afford to do that,” said Creamer.

They say they were raised in a culture where people had to “pay their dues” through unpaid labor. However, they say the culture is shifting and people are learning that their work should be valued at all levels.

Vera’s own sister, a sophomore in college, was interviewing for an internship when she asked if it was paid – and the employer said it wasn’t.

She explained that her brother had an organization dedicated to eradicating unpaid labor, and declined the opportunity.

“They call the next day, and they’re like, ‘Okay, how about $18 an hour?"” Vera said, applauding his sister for advocating for herself.

Amazon warehouse workers vote against union, a setback for US labor campaign