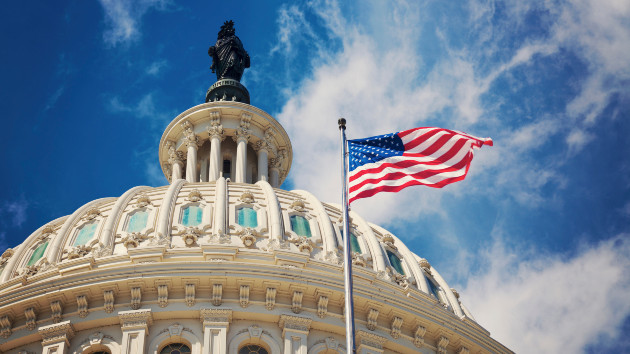 (WASHINGTON) — A broad bipartisan group of senators who worked for months on legislation to reform the nineteenth-century law governing the Electoral College process and counting of votes after presidential elections scored two major victories on Tuesday.

First, Senate Republican Leader Mitch McConnell of Kentucky threw his influential support behind their bill and then every member of the Senate Rules Committee — except Texas’ Ted Cruz — voted to send it to the floor for consideration.

“I strongly support the modest changes that our colleagues in the working group have fleshed out after literally months of detailed discussions. I will proudly support the legislation, provided that nothing more than technical changes are made to its current form,” McConnell announced in a floor speech, repeatedly calling the changes to current law “common sense” and “modest.”

The rules panel — meeting in a rare session on Tuesday to formally consider the proposed Electoral Count Reform Act (ECRA) authored by Sens. Susan Collins, R-Maine, and Joe Manchin, D-W.Va., along with 18 other senators — made a handful of changes to the bill that lawmakers hope will help ensure states, Congress and future vice presidents can never overturn presidential election results.

The legislation addresses a number of apparent loopholes and procedural vagueness in the Electoral Count Act of 1887, which prescribes how presidential electors are counted every four years.

The law was a major focus of then-President Donald Trump’s efforts to overturn his 2020 defeat by Joe Biden, the House’s Jan. 6 committee has said. Trump and his allies wanted his vice president, Mike Pence, to reject the electors for Biden and hijack what is historically a ceremonial role in overseeing the certifying of each state’s slate of electoral votes.

The ECRA specifies the vice president’s role in the certification is ceremonial.

The bill would dramatically raise the number of congressional objectors required to challenge a state’s election results — up from one lawmaker in each chamber to 20% of members in both the House and Senate.

The ECRA would also clarify that states may not select electors after Election Day, as Trump and his allies sought unsuccessfully to do, according to the Jan. 6 committee; and the legislation would dictate what happens if an alternate slate of electors is presented to Congress, which the Jan. 6 committee has said was another element of Trump’s push to reverse his loss.

“These are provisions … that will achieve a strong bipartisan consensus, and we should be very proud of this bill,” Senate Rules Committee Chair Amy Klobuchar, D-Minn., said alongside the panel’s top Republican, Roy Blunt, a former Missouri secretary of state. The pair worked together to craft some additional changes to the Collins-Manchin bill that was approved Tuesday.

The original ECRA proposal struck a provision of the 19th-century law that could be used by a state to declare a “failed election.” Instead, a state would have been permitted to modify the period of its elections only in the event of extraordinary and catastrophic circumstances. But Klobuchar and Blunt went further in their revisions.

The “failed election” provision would only be triggered by “force majeure events that are extraordinary and catastrophic,” according to the newly approved legislation. Klobuchar and Blunt said in a statement that this would “ensure that only unforeseen emergencies trigger extended elections and guard against bad faith exploitation of the extended election provision for political reasons. While the original bill is a significant improvement on the ‘failed election’ provision in the current Electoral Count Act, this clarification provides an important safeguard against political gamesmanship through attempts to manipulate these provisions while ensuring states have flexibility to respond to genuine emergencies.”

The Klobuchar-Blunt changes would also “prevent further delay in certification of elections by clarifying that each state governor must ‘immediately’ transmit a certificate of electors to Congress and the Archivist of the United States once the state’s election is certified,” according to the lawmakers’ statement.

Not everyone was in agreement Tuesday.

“This bill is a bad bill. It’s a bad bill, bad law and poses serious problems for democracy,” Sen. Cruz, a committee member and constitutional lawyer, said during Tuesday’s hearing. “It’s exceptionally bad policy … This bill is all about Donald J. Trump.”

Cruz argued the ECRA “enhanced the federalization of elections” and added, “I do not understand why Republicans support it.”

But the bipartisan backing shown Tuesday points to a likely high GOP vote count when the upper chamber deals with the legislation later this year.

Sen. Mark Warner, D-Va., who chairs the intelligence committee and was part of the election reform working group, said he hopes lawmakers will consider future changes that take into account cybersecurity events.

Both parties have, in recent decades, sought — largely through symbolic objections and speeches from lawmakers — to use the country’s arcane federal election law to partisan advantage in what is usually a simple, barely noticed ceremony at the heart of a peaceful transfer of power in the U.S.

The legislation approved in committee on Tuesday is designed to close the door on some of that.

The House voted out its own reform bill last week with nine Republicans supporting it, none of whom will be on the ballot in November after either choosing to retire or losing their primaries.

Of the seven Republican senators on the rules committee who voted for the bill Tuesday, only two — Blunt and Richard Shelby of Alabama — are retiring. Sen. Cindy Hyde Smith, who also backed the proposal in committee, was one of the GOP objectors to the certification of Biden’s victory on Jan. 6, 2021.

McConnell made clear Tuesday that the House bill would go nowhere in the Senate.

“It’s clear that only a bipartisan compromise originating in the Senate can become law,” he said at the committee meeting. “We have one shot to get this right.”

Lawmakers are expected to deal with the legislation when they return from the November midterm elections in a lame-duck session.