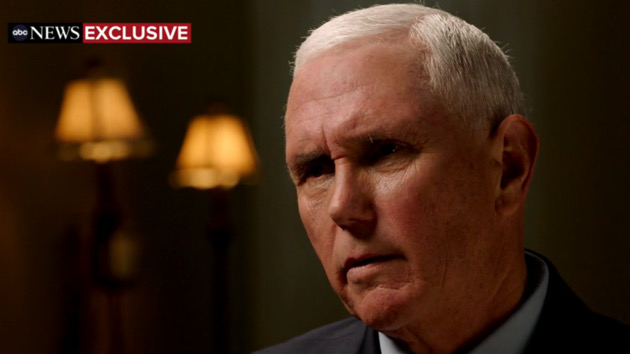 (CARMEL, Ind.) — In an exclusive interview with ABC News’ “World News Tonight” anchor David Muir, former Vice President Mike Pence was pressed on his rhetoric in the days leading up to the riot at the United States Capitol on Jan. 6, 2021.

“When I first heard about it in early December, that there might be a rally in Washington,” Pence told Muir, “I thought it might be useful to just call attention to the legal process that would take place on the floor of the House and Senate, where members, under the Electoral Count Act, would have the opportunity to evaluate allegations of voting irregularities, evaluate any evidence that would be presented, and ultimately resolve those issues in the peaceful transfer of power.”

Muir asked Pence about some of his words to supporters leading up to the rally: “But you knew the temperature was rising in the country. You knew what the former president was saying about widespread fraud and these theories being put forth by Rudy Giuliani and Sidney Powell and the president himself. And you actually thought a rally on the morning of Jan. 6 was a good idea?”

Pence, who is releasing the memoir So Help Me God on Tuesday, responded: “Well, when I first heard about it in December, as I wrote in my book, it occurred to me that it might be useful, to simply have supporters in town to call attention to the legal process.”

“In hindsight,” Muir asked, “do you think that that was a good idea?”

“​In hindsight, it was not a good idea,” Pence replied.

“There was an expectation created that I could do something to change the outcome of the election,” he continued. “In fact, as we drove up to the Capitol, I was sitting next to my daughter in the motorcade, and I looked out across the east front of the Capitol and people were cheering our motorcade, David, and in a peaceful gathering.”

Muir asked Pence on whether his own words at a Georgia rally two days before the Capitol riot could have given incentives to the crowd: “In looking back to that moment, do you have any regrets about your own rhetoric? Just two days before Jan. 6, you were in Georgia and you said: ‘We all have our doubts about the election. Come this Wednesday, we’ll have our day in Congress. We’ll hear the evidence.’ Were you feeding the false hope?”

Muir pressed: “But do you regret the rhetoric when you look out the window and you see people? And you wrote in your book: ‘These people had been told that the outcome of the election could be changed.’ You knew the rhetoric that was out there. Were you feeding into it by saying this just two days before the election: ‘We’ll see the evidence. Wednesday will be our day.’?”

Muir pressed Pence on what was “the evidence” he was referring to at that rally.

“You write in the book about the attorney general, Bill Barr, Dec. 1, saying: ‘There was no widespread fraud that would’ve overturned this election.’ You write it in the book that you are aware that he said that. You agreed with him. You write about the 60 cases that did not go your way. Why are we still saying two days before Jan. 6 to America and to your supporters: ‘We’ll have our day’? In looking back, was there an opportunity there for you to take down the temperature?”

“Well, David, hindsight is always 20-20,” Pence responded. “But I never imagined the violence that would ensue on Jan. 6.”

Pence was overseeing Congress’ certification of the 2020 Electoral College results on Jan. 6, 2021, when a large crowd urged on by then-President Donald Trump marched to the United States Capitol, overran security and vandalized the building, sending Pence and congressional lawmakers into lockdown.

Trump, who has insisted he did nothing wrong, ultimately told the rioters to leave but only after berating Pence for not blocking the certification — which Pence noted he couldn’t legally do — and repeating baseless conspiracy theories about widespread fraud in the 2020 election.

During the exclusive interview at the former vice president’s home in Indiana, Muir pressed Pence further on the Capitol riot, whether Trump should ever be in the White House again, if Pence will run for president, whether Trump hurt Republicans in the midterms and what Pence makes of authorities saying classified documents were taken from the White House.

Biden to award Citizens Medal to officers who defended Capitol on Jan. 6