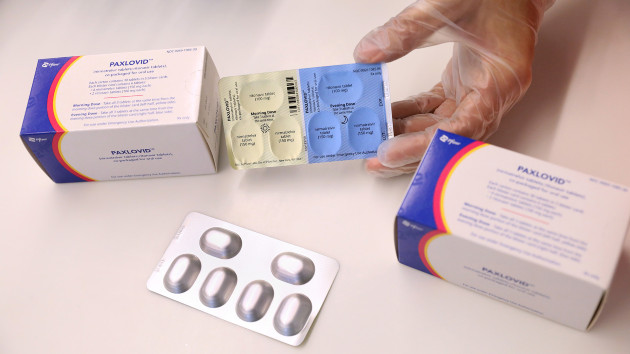 (NEW YORK) — Six months ago, Dr. Joseph Boselli said he was prescribing the antiviral drug Paxlovid to nearly everyone who turned up at his practice with COVID.

Now, the internal medicine physician at Jefferson Health in Philadelphia said he’s reserving it mostly for people who are 60-plus, with serious health problems, or who aren’t up-to-date on their vaccines.

“I got four calls today, but I only gave Paxlovid to two because they were older,” said Boselli, an internal medicine physician at Jefferson Health in Philadelphia.

After Paxlovid hit the market in December 2021, the bitter, metallic-tasting antiviral pills were so successful at reducing the risk of hospitalization with COVID that many doctors were willing to prescribe the drug to younger adults too despite federal guidelines suggesting it should only go to high-risk patients.

The drug stops the virus from replicating in the body and works best when taken within five days of getting symptoms.

Now, after more than 164 million courses of Paxlovid have been shipped around the world since April, doctors say a clearer picture of the drug is emerging, including its limitations with younger population and the possibility of rebound.

“The tincture of time has showed us that while it is a great drug, and it really does work, it’s not meant for everybody,” said Boselli.

Here are three things to know:

Overall, the drug works as promised, doctors say, by dramatically reducing the chances that an older or high-risk individual might wind up hospitalized or dead.

What’s more is that it might help prevent “long COVID.”

A study released on Monday by the Veterans Administration looking at the medical records of 56,000 people found that taking Paxlovid early decreased the chances of experiencing “long COVID” by some 25%.

Still, the drug isn’t right for everyone, including people taking certain medications such as some cholesterol-lowering drugs and blood thinners.

Also, one study released this summer found little to no benefit for younger adults when looking at some 100,000 patients in Israel. While researchers found the drug reduced hospitalization by roughly 75% when given soon after infection to people 65-plus, it saw no measurable benefit for people ages 40 to 64.

In June, Pfizer announced it would stop enrolling “standard-risk” patients in a trial to see if the broader public might benefit.

In a statement at the time, Pfizer CEO Albert Bourla said, “With up to 40-50% of people around the world estimated to be high risk, we believe there remains a significant unmet need for treatment options to help combat this disease, and we will continue to prioritize efforts to advance the development of Paxlovid.”

Less understood about Paxlovid and COVID in general is a person’s chance of “rebound” — a phenomenon in which a person recovers from an infection and tests negative, only to redevelop COVID symptoms or test positive within eight days after recovering.

The experience is frustrating because the recommendation is that the person return to isolation for another five days because people testing positive during rebound are thought to remain contagious.

The good news is that rebound cases are mild and mostly inconvenient, not life threatening.

The likelihood of getting rebound after taking Paxlovid was initially thought to be very small, less than 2 percent in most cases, according to the Food and Drug Administration and Pfizer, the company that makes the drug.

But doctors say those estimates now seem too low compared to the number of rebound cases being reported, including high-profile examples at the White House.

Doctors interviewed by ABC News put the real estimate of Paxlovid rebound at anywhere from 10 percent to as much as 30 percent of cases, even though no one knows for sure.

But Diaz said he’s also telling patients that about a third of people who get COVID experience rebound even without treatment.

“There’s a good chance that you’ll have a rebound whether you take treatment or not,” he said. And with Paxlovid, studies have found “it significantly reduced chance of hospitalization and death,” Diaz added.

Health experts and U.S. regulators says they are more concerned that vulnerable patients aren’t getting the drug than they are concerned about healthy people rebounding.

After Walensky wound up with her own case of Paxlovid, the CDC director noted there are still some 400 deaths a day due to COVID and made clear there were no plans to pull back on the government’s recommendation of the drug.

Bob Califf, her FDA counterpart, agreed. He announced on Monday that he tested positive for COVID over the weekend, and a spokesperson confirmed he is being treated with Paxlovid.

“I’m concerned that the discussions about ‘Paxlovid rebound’ are distracting us from the basis for the (drug’s authorization): a substantial reduction in death and hospitalization for high-risk patients,” he tweeted.

Dr. Judith O’Donnell, an infectious disease specialist at Penn Presbyterian Medical Center, said she agrees there are serious benefits for people 50-plus as well as younger patients with serious underlying health conditions like asthma, obesity or kidney disease.

“The drug does make a real and measurable difference in the trajectory of the infection,” she said.

So “even though there’s a risk of rebound, that would not prevent me from using it in the correct patient,” she later added.

Physician weighs in on how patients, doctors can improve their trust

People may not always get helpful weight loss advice from their doctors, study finds

Hospital diaries: Doctors reveal how staff are dealing with surge of respiratory infections