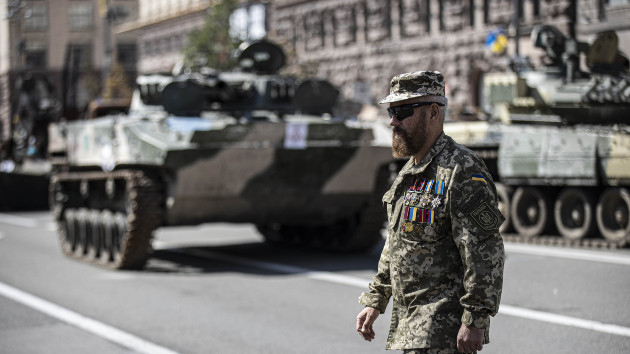 Aug 25, 11:47 AM EDT
All reactors at power plant shut down for first time in history

All of the reactors at Zaporizhzhya nuclear power plant, where shelling has been ongoing, have been shut down for the first time in the plant’s history, Ukraine’s state nuclear regulator Energoatom reported.

Zaporizhzhya — the largest nuclear power plant in Europe — has six reactors, two of which are active, according to Ukraine’s state nuclear regulator, Energoatom. At 12:12 p.m. local time, the last operating line providing power to the plant was disconnected due to hostilities in the area, and as a result all six reactors were disconnected from the grid for 17 minutes, Energoatom said.

At 12:29 p.m. local time the overhead line was restored and reactors Nos. 5 and 6 start operating again.

At 2:14 p.m. local time, the overhead line was disconnected again, shutting down reactor No. 6 and leaving only reactor No. 5 operating. Work is underway to reconnect No. 6 to the grid.

Twenty-one people were killed and another 22 were injured in a Russian missile strike on a train station in Chaplyne, in the central Ukraine region of Dnipropetrovsk, said Kyrylo Tymoshenko, deputy head of the president’s office.

The White House said the U.S. believes Russia could hold “sham referenda” in occupied Ukrainian territory within days or weeks.

White House spokesman John Kirby said last month that Russia was “installing illegitimate proxy officials in the areas of Ukraine that are under its control” who would then arrange “sham referenda” as a precursor to annexation.

Kirby told reporters Wednesday that the U.S. government believes “these referenda could begin in a matter of days or weeks.”

“We expect Russia to try to manipulate the results of these referenda to falsely claim that the Ukrainian people want to join Russia,” he continued. “It will be critical to call out and counter this disinformation in real time.”

“Any claim that the Ukrainian people somehow want to join Russia is simply not true,” Kirby said, citing polling data. It’s clear, he added, that Ukrainians “value and treasure their independence.”

“It gives me great pleasure to send Your Excellency and the people of Ukraine my warmest greetings on the celebration of your Independence Day,” she said. “In this most challenging year, I hope that today will be a time for the Ukrainian people, both in Ukraine and around the world, to celebrate their culture, history and identity. May we look to better times in the future.”

President Joe Biden in a statement Wednesday said he was “proud to announce our biggest tranche of security assistance to date” to Ukraine: “approximately $2.98 billion of weapons and equipment.”

“This will allow Ukraine to acquire air defense systems, artillery systems and munitions, counter-unmanned aerial systems, and radars to ensure it can continue to defend itself over the long term,” Biden said.

Biden confirmed the money would come through the Ukraine Security Assistance Initiative. The USAI money can be spent on contracts with the defense industry to produce new equipment for Ukraine.

Biden in his statement also marked Ukrainian Independence Day, saying, “Ukrainians have inspired the world with their extraordinary courage and dedication to freedom.”

“Today is not only a celebration of the past but a resounding affirmation that Ukraine proudly remains — and will remain — a sovereign and independent nation,” he said.

He continued, “I know this Independence Day is bittersweet for many Ukrainians as thousands have been killed or wounded, millions have been displaced from their homes, and so many others have fallen victim to Russian atrocities and attacks.”

“Today and every day, we stand with the Ukrainian people to proclaim that the darkness that drives autocracy is no match for the flame of liberty that lights the souls of free people everywhere,” Biden said.

Two Zaporizhzhya nuclear power plant employees were killed on their day off when Russian forces shelled the city of Enerhodar, officials said.

Aug 23, 2:35 PM EDT
US to announce its largest single aid package for Ukraine

The U.S. will announce its largest single aid package for Ukraine on Wednesday, according to two U.S. officials. The package is expected to be valued at roughly $3 billion — though one official told ABC News some changes could be made overnight, and $3 billion is on the higher end of the estimates.

A senior U.S. official told ABC News the package will come from Ukraine Security Assistance Initiative funds. Unlike presidential drawdown packages, which pull from existing U.S. equipment stocks, the USAI money can be spent on contracts with the defense industry to produce new equipment for Ukraine.

The U.S. has committed about $10.6 billion in military aid to Ukraine since the beginning of the Biden administration.

Sources within the State Department said the heightened risk of a Russian strike on highly populated centers is most directly tied to Ukraine’s Independence Day on Wednesday.

“The risks are really high,” Ukrainian President Volodymyr Zelenskyy told ABC News. “We are receiving information that there may be a provocation by the Russian Federation, by the occupiers. Therefore, we do not want large gatherings on such days. The days are beautiful, but … our neighbors are not.”

Aug 23, 9:10 AM EDT
Americans urged to leave Ukraine over Russian strikes on civilians

Russia’s FSB is accusing Ukrainian special services of assassinating Darya Dugina, the daughter of Putin ally Alexander Dugina, who was killed by an explosive this weekend.

The FSB said a Ukrainian national arrived in Russia on July 23 with her 12-year-old daughter and rented an apartment in the same Moscow building where Dugina lived, Russia’s state-run RIA Novosti reported. The woman allegedly trailed Dugina for nearly a month and then immediately left for Estonia with her daughter just after this weekend’s bombing.

Russian President Vladimir Putin said in a statement that Darya Dugina was “a bright, talented person with a real Russian heart – kind, loving, sympathetic and open.”

Mykhailo Podolyak, an adviser to Ukrainian President Volodymyr Zelenskyy, said Ukraine is working under the assumption that Russian secret services are behind the killing, saying “Ru-propaganda lives in a fictional world.”

In Kyiv, all public events are canceled and government employees have been told to work from home through the week.

In Kramatorsk, public events have been canceled for Tuesday through Thursday and public transportation has been stopped.

Dugin’s daughter, Daria Dugina, was killed in a blast near Moscow on Saturday.

“A presumed explosive device planted on a Toyota Land Cruiser went off when the car was moving at full speed past Bolshiye Vyazemy in the Odintsovo urban district at about 9 p.m. on August 20, and the car caught fire,” the Russian Investigative Committee said in a statement posted to Telegram. “The woman driving the car died instantly. The victim was identified as journalist, political analyst Daria Dugina.”

Alexander and Daria attended a traditional patriotic festival on Saturday afternoon, according to the Odinstovo administration. They’d planned to leave together in the same vehicle, but Daria instead drove alone.

Detectives established that the bomb was planted on the underside of the driver’s side of the vehicle, the committee said. Russian media outlets had reported that the SUV belonged to Dugin.

“Detectives and specialists from the Main Forensic Department of the Russian Investigative Committee are continuing to examine the incident scene. In particular, a forensic technician examined the charred vehicle before it was taken to a special parking lot,” the Committee said.

Biological, genetic, physical, chemical and explosive examinations have been scheduled, the committee said.

U.S. officials do not know who to blame for the car bomb that killed the daughter of political theorist Alexander Dugin, a close ally of Russian President Vladimir Putin, Rep. Adam Schiff, the Democratic chair of the House Intelligence Committee, said during an interview Sunday on CNN’s “State of the Union.”

Daria Dugina, a 29-year-old TV commentator, was killed on the Mozhaisk Highway in the outskirts of Moscow on Saturday night by an explosive that had been planted in the Toyota Land Cruiser she was driving, Russia’s state-run news agency TASS reported.

Alexander Dugin, often referred to as “Putin’s brain,” had just attended “Tradition” cultural festival with his daughter, according to TASS. Russian media outlets reported that the SUV belonged to Dugin.

Schiff said Sunday that he had not yet been briefed on the killing and that he “couldn’t say” who is behind it, adding that he hoped it was an “internal Russian affair” rather than something “emanating from Ukraine.”

“There are so many factions and internecine warfare within Russian society, within the Russian government,” Schiff said. “Anything is possible.”

Adviser to the Ukrainian presidential office Mikhail Podolyak denied Kyiv was involved in the explosion that killed Dugina during a televised interview on Sunday.

“I emphasize that Ukraine certainly has nothing to do with this, because we are not a criminal state like the Russian Federation, and even less a terrorist state,” Podolyak said.

Videos circulating online show smoke rising over Sevastopol, the largest city in Crimea and a major port on the Black Sea.

The city’s Russian-appointed governor said a drone was struck down and fell through the roof of Russia’s Black Sea Fleet Headquarters. Ukraine has not commented on the strike.