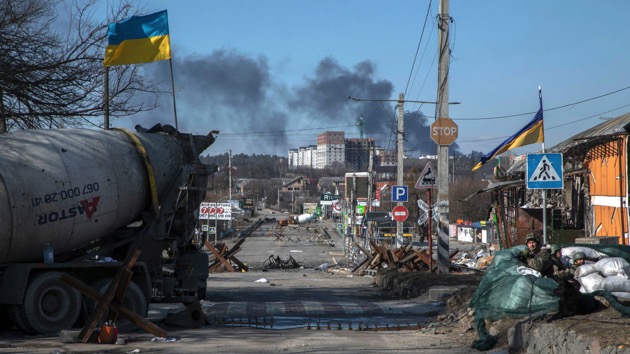 Russian forces moving from neighboring Belarus toward Ukraine’s capital, Kyiv, have advanced closer to the city center in recent days despite the resistance, coming within about 9 miles as of Friday.

Monday’s update said more than 1.72 million people have crossed the border into Poland, but didn’t include updated figures for crossings into all the other countries that border Ukraine.

Rafal Trzaskowski, mayor of Warsaw, Poland, told The Telegraph on Saturday that his city’s ability to absorb refugees fleeing the Ukraine war was “at an end” and that the city would be overwhelmed unless an international relocation system was created.

“We are doing all we can but we cannot rely on improvisation anymore,” Trzaskowski told the newspaper. “We coordinate our work with other mayors in Poland and in Europe, and through this we send buses of refugees to other cities. But we are doing this on our own. We need a European relocation system which will organise it because it is a huge logistical enterprise. We can’t improvise anymore.”

Mar 14, 6:12 am
Russian attacks will increase, may strike Lviv: US official

Russian attacks on Ukraine will increase, with the western city of Lviv among potential targets, a senior U.S. official told ABC News.

Russian officials are convinced the city is being used to stage military operations and that some high ranking people are present. Russia may target the city, since “they want to create more terror,” an official said.

Russians have warned that anyone who supplies weapons to Ukraine, or offers safe haven, could be targeted.

After Sunday’s attack near the Polish border, concern is growing over a possible strike in Poland, an official said. There are several areas in Poland where weapons are currently being staged or stored.

A fourth round of talks between Russia and Ukraine are due to begin on Monday, following optimistic comments from both sides over the weekend that they are moving towards a compromise.

On Sunday, one of Russia’s negotiators, an MP Leonid Slutsky told Russian media that he believed “substantial progress” had been made and that he believed that progress could even “grow into a unified position” in documents for signing in the next few days.

Ukraine’s chief negotiator, Mykhailo Podolyak, in interviews and videos posted on Twitter on Sunday also said that Russia “looks at the situation far more properly” and has stopped throwing out “ultimatums.”

Podolyak told the Russian newspaper Kommersant the sides were discussing concrete proposals and that the key issue was “security guarantees” for both Russia and Ukraine. He said the sides were discussing a cease-fire, as well as compensation to Ukraine’s infrastructure destroyed during the war. But he did say that “some time is still needed” for Russia to understand the reality of its situation.

The comments have raised hopes Russia may be lowering its war aims as a result of the fierce Ukrainian resistance and tough response from Western countries.

U.S. Deputy Secretary of State Wendy Sherman told Fox News on Sunday that the U.S. also sees Russia is showing signs of a “willingness to have real, serious negotiations.”

But is unclear where the compromise might be found.

Last week, Russia was insisting that Ukraine change is constitution to guarantee it will not join NATO or the European Union. Ukraine had signalled that was not possible but President Volodymyr Zelenskyy has hinted there might be some negotiating space around NATO, which he has acknowledged Ukraine is not close to joining.

In a video posted to Twitter Monday morning before the start of the talks, Podolyak said Ukraine’s positions were “unchanged”: it was demanding an immediate ceasefire and a withdrawal of Russian troops. He said only after that could any political settlements be discussed.

Russia has asked China for military support and other aid in the time since it invaded Ukraine on Feb. 24, a senior U.S. official told ABC News.

On Sunday, President Joe Biden’s top national security adviser, Jake Sullivan, said during an interview with CNN that the U.S. was “watching closely to see the extent to which China actually does provide any form of support, material support or economic support, to Russia.”

“It is a concern of ours,” Sullivan said, adding that the U.S. has communicated to Beijing that it will “not stand by and allow any country to compensate Russia for its losses from the economic sanctions.”

Sullivan is planning to meet a top Chinese official in Rome on Monday.

The Financial Times, The Washington Post and The New York Times first reported on this development.

Russia-Ukraine live updates: Ukraine urged to investigate use of landmines in Izium