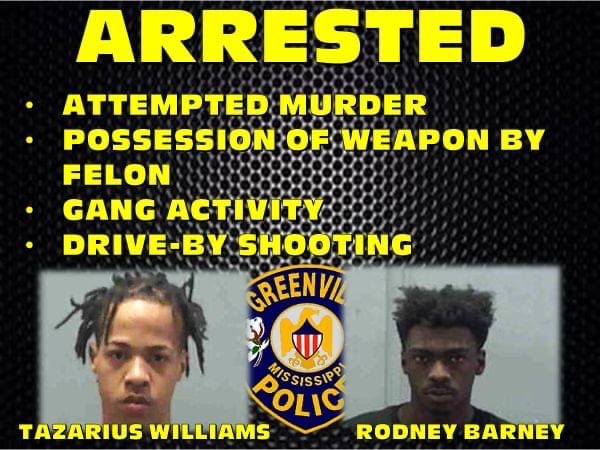 The Greenville Police Department has made two arrests in the January 12th shooting of a 14-year-old. Police have charged 21-year-old Rodney Barney and 20-year-old Tazarius Williams with several felony charges. On Thursday, January 12th, a Greenville Police Officer was patrolling the area of East Walker and McAllister Streets when  several shots came from a white vehicle. The Greenville police officer attempted a traffic stop with the suspected vehicle, which caused a pursuit. The vehicle came to a stop in the 600. block of Cately Street, and both driver and passenger fled on foot. Police caught Barney in the area and he was transported to the Greenville Police Department. Williams later turned himself in. Both Barney and Williams have been charged with attempted murder, possession of a firearm by felon, felony fleeing and gang activity. Both are being held in the Washington County Regional Correctional Facility.