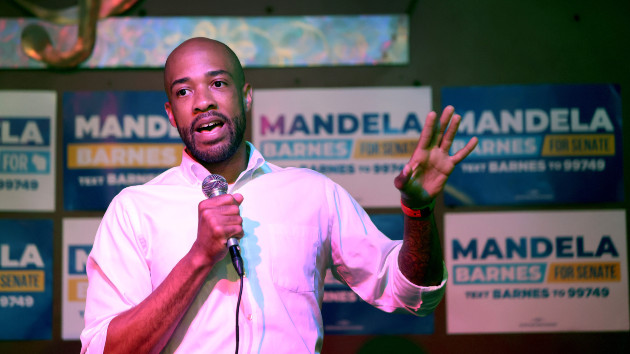 (NEW YORK) — After several major candidates dropped out of Wisconsin’s Democratic Senate primary within a week of one another, the party has coalesced around Lt. Gov. Mandela Barnes with the goal of defeating incumbent Republican Sen. Ron Johnson.

Control of Congress’ upper chamber could next be at stake in one of the country’s fiercest battlegrounds, which Barnes’ former rivals-turned-supporters cited in stepping aside.

“Every day matters, and that’s why the second I realized that there was no path forward, we made sure that we did what we thought was best for us to be able to defeat Ron Johnson,” Lasry, who was arguably Barnes’ stiffest competition, told reporters in late July.

“The progressive vote is consolidated and the progressive family is one because today I’m endorsing Mandela Barnes for U.S. Senate,” Nelson said in his own statement when he left the race last month.

And Godlewski, the last of the three to exit, said: “If there’s one thing we know about Mandela Barnes is he’s no stranger to running statewide and he has done well. And he’s going to show like he did in 2018 again in 2022 that he is the best candidate and he will defeat Ron Johnson.”

In an interview with ABC News before the primary, Barnes called the endorsements of his former opponents “huge.”

“It feels great, because it shows the momentum and also the strength that this campaign has, the broad coalition that we set out to build in the first place,” he said.

While Barnes sailed through the Democratic nominating contest, there are no guarantees in November’s general election in this sharply divided swing state. Barnes’ progressive leanings and endorsements from left-wing standard-bearers like Sens. Elizabeth Warren and Bernie Sanders could run off more moderate voters.

“We are basically a 50-50 state and politics here resembles trench warfare more than it resembles a normal competition between two political parties,” said University of Wisconsin at La Crosse government and politics professor Anthony Chergosky. “The political competition in Wisconsin is vicious and it is a battle of two parties that are completely dug in against one another. And so that is absolutely going to be used against Mandela Barnes in the upcoming general election campaign against Ron Johnson.”

Wisconsin’s Republican Party has already gone on the attack.

“Mandela Barnes will speak out of both sides of his mouth to convince voters that he is a moderate – but Barnes has earned the support of extremists like [Rep. Alexandria Ocasio-Cortez] and Bernie Sanders because he wants to abolish ICE, end cash bail, and impose fringe-left policies in Wisconsin and the nation. As families confront sky-high inflation, rising crime, and a crippled education system under Democrats, Wisconsinites will soundly reject the Barnes-Biden agenda,” Wisconsin GOP Executive Director Mark Jefferson wrote in a statement, in part.

“We’re talking about a party whose ideology is quite simple: Donald Trump,” he said.” So I dismiss any sort of notion or any type of way that they would try to paint me.”

Johnson, for his part, is likely to face more scrutiny ahead of November over his ties to former President Donald Trump and what the House Jan. 6 committee described as his role in a fake elector scheme to overturn the 2020 election. (Johnson has disputed parts of this, saying he was not fully aware of some of the information he passed along.)

Barnes told ABC News that he hopes his humble beginnings and what he calls his middle-class values will be his ticket to Washington. A son of an autoworker and a public school teacher, he is the first Black lieutenant governor in the state and could be the state’s first Black senator if he wins in November.

“I know what a lack of opportunity means, and I carry my story of my experiences as a Black man who was born in Milwaukee, who still lives in Milwaukee, I take that all across Wisconsin,” he said.

Barnes, who is 35 years old, is also a part of a key demographic in the state: millennials. Despite being the largest generation, millennials aren’t proportionately represented in either chamber of Congress, which has some Wisconsin voters calling for more generationally diverse leadership.

“Having somebody who is so much younger and can see the way that we think now, the way that we work now — it’s incredibly important,” said Adrianna Pokela, a millennial voter and founder of a women’s rights organization in Green Bay.

What is a ‘motion to vacate’ — a key sticking point in GOP speaker battle?