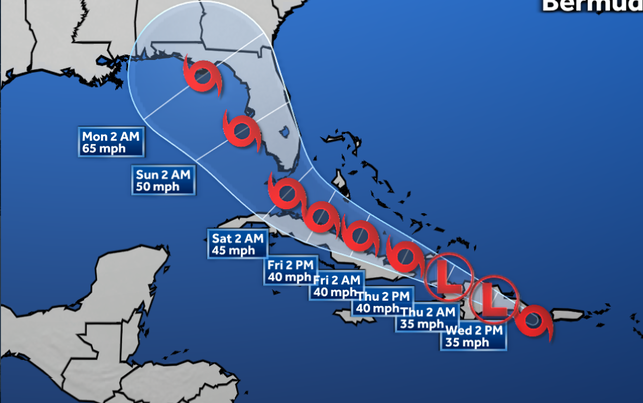 Fred, the first named storm in a month, was downgraded to a tropical depression on Wednesday night but expected to strengthen again ahead of landfall in Florida, possibly as early as Friday.
If the storm forecast holds, up the storm could be heading straight for Mississippi and the other Gulf states.
The risk of Fred impacting the Sunshine State was increasing as it brought heavy rain and flooding risks to the Caribbean island nations of the Dominican Republic and Haiti, according to the National Hurricane Center. Fred reached tropical storm strength late Tuesday and drenched the U.S. Virgin Islands and Puerto Rico, knocking out power in some locations.
The storm weakened to a tropical depression, as expected, but forecasters say it will gain momentum en route to Florida, potentially bringing severe weather to the
bottom of the peninsula before the weekend.
Contact Jay Allen at Jay@DeltaRadio.net