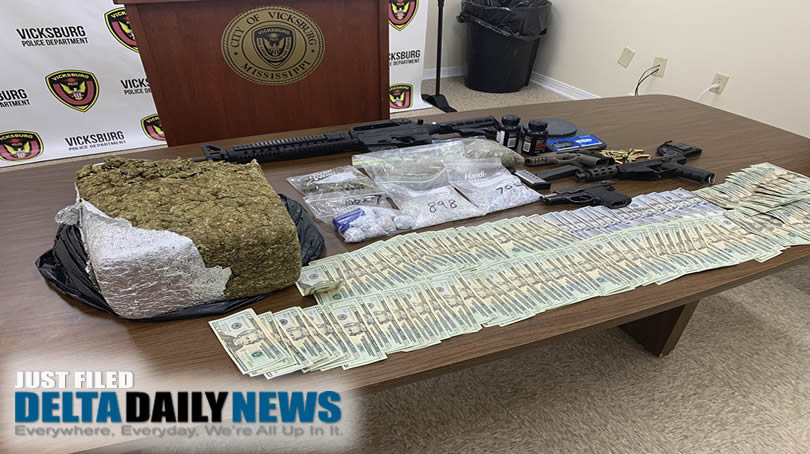 Duane Williams is now charged with two counts of Aggravated Trafficking of Narcotics, as well as four counts of Possession of a Firearm by a Convicted Felon.

Police Chief Milton Moore said this is the largest bust seen in his 21 year career in the city.

“I have been on numerous raids and this is the first time in my career that I’ve ever seen a huge amount of drugs like this,” Chief Milton Moore said.

Lt. Jeff Merritt leads the local narcotics division. He says among the drugs on display are 9 kilos of marijuana, 2700 ecstasy pills.

“We had a subject earlier this year that had about 900 pills. These are the most ecstasy pills I’ve taken in my career in the marijuana. It is a significant amount,” said Lt. Jeff Merritt.

“My guys do a great job. They get complaints daily of drug activity,” said Moore.

Chief Moore admits drugs are an ongoing issue in the city.

Back in February, the narcotics team seized 500 grams of methamphetamine, firearms, and cash.

“Yes, it is a problem. We are starting to see more meth related arrests. But yes, Ecstasy and Meth are really our main problems,” said Police Chief Moore.

Vicksburg Police say they are making progress. They have made at least 40 drug busts in the city since the beginning of the year, and they have taken more than a quarter million dollars’ worth of drugs off the streets.

“It is good to get the drugs. The drugs we got today is not ending. It is just a bump in the road for us. They are going to be more people out there tomorrow,” Merritt said.

A man was busted with hundreds of grams of marijuana in Vicksburg.

One person was shot Saturday around 3 a.m. on Second North Street near the intersection of Clay Street in Vicksburg.

A 17-year-old has been arrested in the shooting death of a 14-year-old in Vicksburg.

A car emerged into flames after crashing with an 18-wheeler Sunday morning along I-20 west in Vicksburg.