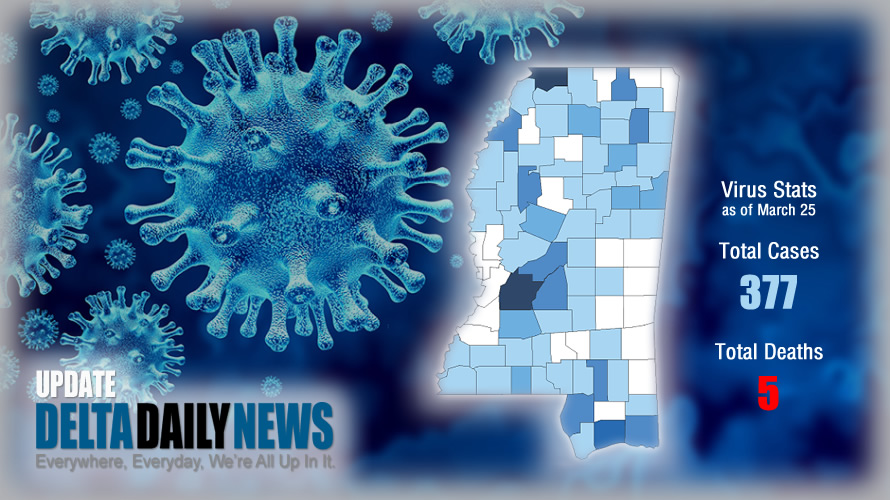 JACKSON, MS (Ben Caxton) — Mississippi health officials yesterday morning confirmed two new coronavirus deaths in the state. The cases were a Wilkinson County male 85-90 years old with underlying conditions who died while hospitalized and a Tunica County female 75-80 who died in a long-term care facility. On Tuesday a Holmes County male in his 60s with underlying health conditions also died from effects of the disease. Deaths have also been reported in Hancock and Webster counties. Nearly 2000 people have been tested and 57 new cases were reported on Wednesday bringing Mississippi’s total to 377. Two deaths have also been reported in Arkansas, where there have been 280 positives from over 1000 tests. One of the new cases reported in Arkansas is a judge from Drew County. Tennessee has 784 confirmed coronavirus cases with three deaths. 170 cases are Shelby County including two Regional One Health employees. Health officials believe 21-40-year-olds are driving the Memphis-area spread of COVID-19.

On Wednesday, September 30, 2020, members of the U.S. Marshal’s Fugitive Task Force arrested an individual in an ongoing homicide investigation.

A 17-year-old boy was arrested for an armed carjacking on Wednesday night in Jackson.

Mississippi Governor Tate Reeves is giving another update on the response to COVID-19.

Boy Scout Troop 4442 will be hosting the Delta... Read More.
Previous Next