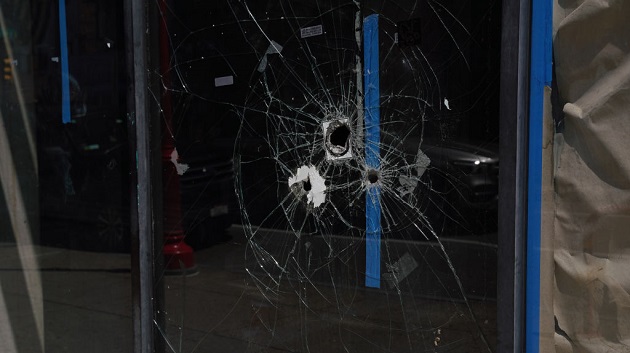 (PHILADELPHIA) — At least two suspects in a mass shooting Saturday night in Philadelphia are expected to be charged as early as Monday afternoon as police continue to work to identify other gunmen in the rampage that left three people dead and 11 injured, according to prosecutors.

Philadelphia District Attorney Larry Krasner said at a news conference Monday morning that he expects to approve charges soon against two suspects “in connection to what we anticipate are non-fatal shootings.”

Krasner, who did not name the suspects, said he expects to sign off on the charges stemming from the gun violence by the end of Monday.

He said that based on the caliber of shell casings found at the crime scene, at least four guns were involved in the shooting on Second Street, a popular nightlife area full of bars and restaurants.

Philadelphia police officials said officers recovered two guns from the scene, including one with an extended magazine, authorities said.

“Hour by hour we are finding out more information,” Kramer said.

Krasner described witnessing a “chilling” scene when he visited the site of the shooting just hours after it occurred.

“It is no less chilling that it happened in no less than 10 places around the country in a space of a few days,” said Krasner, referring to mass shootings that occurred over the weekend in nine different states that left a total of at least 17 people dead and 62 injured.

The Philadelphia shooting erupted just before midnight Saturday at the busy intersection of Third and South streets.

Inspector D.F. Pace of the Philadelphia Police Department said hundreds of people were milling about the area when the shooting caused a panic and sent people running in all directions, some diving behind cars for cover.

Philadelphia Police Commissioner Danielle Outlaw said at a press conference Sunday afternoon that a police officer responding to gunshots in the area witnessed a man firing a gun into a crowd and attempted to detain him. Outlaw said the officer fired at the armed man three times before losing the assailant in the crowd.

Outlaw said investigators believe the officer shot the gunman, who is still being sought.

Investigators are combing through security video to identify the suspects and determine a motive for the shooting.

Outlaw said the shooting possibly started during a physical confrontation between two people, including one of the people killed in the incident.

“These individuals eventually began firing at one another with both being struck, one fatally,” Outlaw said.

Outlaw said two of the slain victims were innocent bystanders as well as many of those who were wounded.

One of those killed was identified as Kris Minners, a resident adviser at Girard College in Philadelphia, the Girard College Federation of Teachers union said in a statement. Two more victims were identified by the Philadelphia Police Department Sunday afternoon as 34-year-old Gregory Jackson and 27-year-old Alexis Quinn.

“The loss of Kris reminds us that gun violence can and will touch everyone in our nation as long as our elected officials allow it to continue,” the teachers’ union statement read.