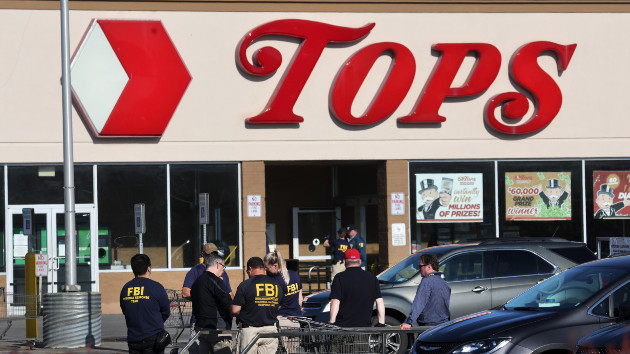 (NEW YORK) — Within the pages of the alleged Buffalo shooter’s plan to attack a Buffalo, New York supermarket, he described the radical ideals he said he cultivated on the internet.

It included racist and antisemitic rants reminiscent of the sentiments espoused by shooters who committed similar atrocities in El Paso, Texas, and Charleston, South Carolina, in recent years, according to an ABC News review of the document.

Federal security agencies have increasingly sounded the alarm on white supremacists and other far-right-wing extremists as a “significant domestic terrorism threat.”

However, experts on hate in the U.S. said this most recent mass shooting highlights how little the country has done in reckoning with the growing danger of white supremacy in this country.

“We’ve had too many wake-up calls at this point for me to feel confident that we’re going to suddenly change the current path that we are on,” Michael Edison Hayden, a senior investigative reporter at the Southern Poverty Law Center, told ABC News.

Radicalization can occur anywhere and without a particular group or organization to belong to thanks to the internet and the normalization of hateful rhetoric in media, experts said. It’s given right-wing extremism an environment to thrive and grow.

The Center for Strategic and International Studies (CSIS), a nonprofit policy research organization, found that alleged right-wing attacks and plots have accounted for the majority of all U.S. terrorist incidents since 1994.

“The last two years — 2021 and 2020 — were the highest recorded years of domestic terrorism, plots and attacks, so the trends are pretty concerning,” CSIS Senior Vice President Seth Jones said in an interview with ABC News.

However, Jones said the federal government needs to do a better job collecting and releasing data on domestic terrorist attacks and plots and informing Americans about the severity of right-wing extremism.

There is no public release of such information, he said, which has made it very difficult for Americans to understand the gravity of this problem.

Since 2014, CSIS found that these attacks have been on the rise. Simultaneously, hate crimes have also been on the rise, particularly anti-Black, anti-immigrant and antisemitic attacks, according to FBI data.

“It’s a movement of hatred and violence,” Morial said. “This is not someone just ranting on the internet.”

The normalization of white supremacy and the growing divisive rhetoric of the far-right, Hayden and Morial said, serves to exploit the concerns of vulnerable populations regarding social issues, score political points and win gains for people in power.

“As long as very wealthy people are willing to exploit these feelings of anger in the country, this is going to keep happening,” Hayden said.

Experts said there are two routes to combatting white supremacist extremism in America — personally and through policy.

“This is a deep-seated challenge in the United States, particularly in a culture where individuals have such easy access to guns,” Jones said. “That’s the difference, frankly, between the US and Europe right now, which also has a significant white supremacist challenge in Germany, the U.K., several Nordic countries. What they don’t have, though, is easy access to guns.”

Others stress the importance of getting government funding for improved security in community centers and gathering places, as well as prevention programs and resources that intervene in the radicalization process.

On a personal level, experts recommend calling out racism and white supremacy in your communities as another way to de-normalize and de-platform racist narratives.

Experts also recommend watching out for loved ones who may be encountering extremist ideals online, and avoid leaving them isolated. They say isolation and vulnerability can become a pathway to radicalization.

“Your silence is your acceptance,” Rashawn Ray, senior fellow at The Brookings Institution, told ABC News.

“Unfortunately, this is a part of the DNA that created the United States of America and even though there has been progress, these sorts of incidents continue to show that we are not as far as we think we are,” Ray said.

Suspect wanted in fatal shooting of youth football coach turns himself in to police: Attorney