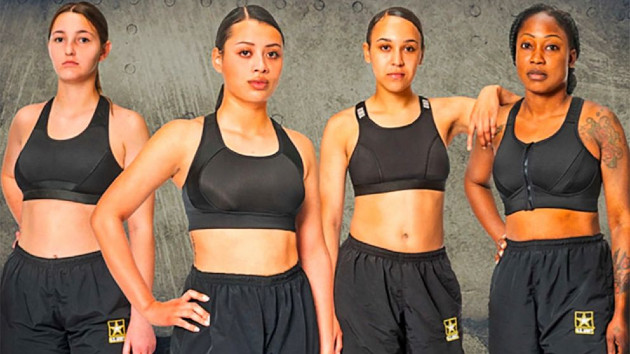 (NEW YORK) — As happens with any new soldier, Kayla Williams went through the standard processing when she joined the U.S. Army in 2000. She was briefed before basic training and issued a uniform.

But something important was missing — a bra.

Male soldiers got underwear, Williams said, but women received an allowance to buy sports bras at the post exchange. The male corporal leading her group was supposed to advise her on the sports bra options she could buy there.

Williams said there was just one problem: the corporal refused to say the word “bra.”

“The fact that he couldn’t even bring himself to say it did not make me feel like I was being treated with full equality, and it didn’t make me feel fully welcome,” Williams told ABC News.

Now 46, Williams served on active duty, including a yearlong combat deployment in Iraq, until 2005 when she left as with the rank of sergeant E5.

She still remembers the look of discomfort on the corporal’s face. He soon called for a female officer to talk about the choices instead.

More than two decades later, the Army still does not have a uniform bra designed to meet all the needs of female soldiers in the field, according to a fact sheet from the Combat Capabilities Development Command Soldier Center.

Some flame-resistant models — in limited sizes — are issued to aviator and combat vehicle crew members, but they are not suitable for other jobs, the DEVCOM fact sheet said.

The Army Uniform Board will discuss the ATB and propose recommendations for it on Dec. 7, according to Jamal Beck, a spokesman for the Army’s acquisition, logistics and technology office. The board’s recommendations for Gen. James McConville, the Army chief of staff, will include whether female soldiers should be issued tactical bras or receive allotments to purchase them.

Each of the prototypes includes a variety of features, such as a dog tag pocket, racerback styles, padding, mesh venting or a front-zip option.

In an interview with ABC News, DEVCOM clothing designer and project lead Ashley Cushon said the team is considering factors such as body type, activity level and personal preference.

“There’s no such thing as one size fits all, especially with bras or sports bras,” Cushon said. “So we want to make sure that we retain as much variety within the designs as possible, so that we’re accommodating as many soldiers as we can.”

DEVCOM has tested ATB models through soldier focus groups, design team leader Annette LaFleur told ABC News. More than 200 soldiers with a variety of specialties have evaluated them, according to the fact sheet.

“The less that they can think about what they’re wearing and focus on their mission or their training, the easier it’s going to be for them,” LaFleur said.

LaFleur said female soldiers have inspired other recent, successful projects, such as an improved hot weather combat uniform. The updated uniform offers a wider range of sizes as of 2021, including multiple women’s and unisex options.

But there is no guarantee that any of the Army Tactical Brassiere concepts will also become a standard of uniforms any time soon. DEVCOM helps develop gear, not approve, manufacture or issue it.

Women were formally admitted into the military as early as 1948. By the time Williams left the Army in 2005, women comprised more than 14% of the active-duty force, according to a Defense Department report. A recent report shows about 16% of the Army’s near-500,000 soldiers in 2021 were women.

Yet the rollout of essential gear designed specifically for female soldiers has been slow. The Army had no body armor made for female bodies until 2012, when it developed an updated version of a tactical vest.

Some male soldiers started receiving ballistic underwear in kits for deployments in 2011, according to the Army News Service. The undergarments, in part made from Kevlar, were designed to protect soldiers in Afghanistan from lower-body injuries caused by roadside bombs. Flame-resistant pants have been issued as well.

The Navy is scheduled to roll out new uniforms later this year — about a decade after trials showed some previous ones were highly flammable, an article from Military.com said.

Williams said adding tactical bras to uniforms would be a step in the right direction for the Army. Good sports bras are often expensive, she said, so she hopes junior troops will have access to quality garments without worrying about out-of-pocket costs.

The veteran said social media critics of the ATB program do not understand that female soldiers need effective uniforms as much as men — and the Army needs female soldiers to succeed.

When Williams was deployed, she could not change her clothes for weeks at a time. Properly fitting bras could set soldiers up for more success in the long run, she said.

And as she looked back, Williams said she was able to extend empathy toward that corporal from in-processing years ago.

“I can try to have a little compassion for where he may have been coming from and how uncomfortable it was for him,” she said. “But yeah, I just think that we really need to normalize talking about things that are normal.”