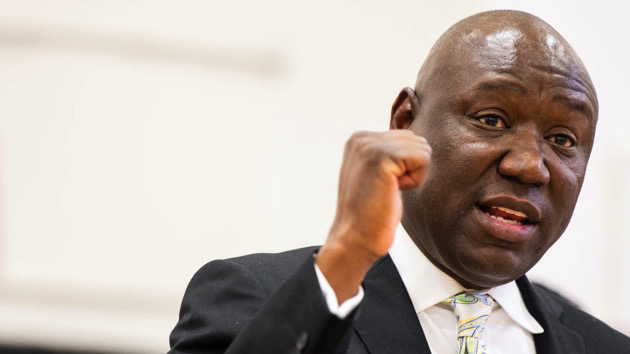 (NEW HAVEN, Conn.) — Civil rights attorney Ben Crump has joined the legal team of Richard “Randy” Cox, a 36-year-old Black man who was injured while being transported by New Haven police in the back of a van.

Crump held a news conference with Cox’s family members in Connecticut Tuesday, along with co-counsel Jack O’Donnell and Louis Rubano, as well as local government and civil rights leaders.

New Haven police arrested Cox on June 18 for allegedly unlawfully possessing a firearm, without incident, after a person attending a block party reported that Cox was carrying a gun. Video of the arrest shows the officers then placed Cox in the back of a police van without seatbelts.

During an abrupt stop, Cox was thrown head-first into the back wall of the van, his lawyers said, and the video shows. When the van arrived at the police station, the video shows, he was still lying on the floor of the vehicle. Cox can be heard in the video telling the officers that he couldn’t move.

The surveillance video of the incident indicates that the officer driving the van and other officers present flouted protocol, the police department and Cox’s lawyers said, failing to wait for medical assistance and dismissing Cox’s pleas for help, allegedly assuming he was drunk.

In the video, one of the officers can be heard saying, “He just drank too much” and then later asks Cox, “Did you have any drugs or alcohol?” and “How much did you have to drink?” The footage also shows the officers dragging Cox by his feet and throwing him into a wheelchair, which his lawyers said could have exacerbated his already life-threatening injuries.

The case has prompted a state investigation and resulted in the officers involved being placed on administrative duty.

Crump said Cox’s case reminded him of the death of Freddie Gray, a Black man who was killed in 2015 while also being transported in a police van. Gray’s death was ascribed to injuries to his spinal cord.

“This is the Freddie Gray case on video,” Crump said. “Thank God, we got the video, so they can’t deny what happens. They can’t deny that they had a man handcuffed and put him in the back of this paddy wagon inappropriately and drove.”

Cox’s oldest sister, LaQuavius LeGrant, 39, said although he is in stable condition, Cox is currently paralyzed from the neck down, requiring a ventilator, breathing tube and feeding tube to survive. He is currently unable to talk and is unlikely to walk again, she said.

“It’s absolutely heartbreaking to go to that hospital room, the ICU, to look in his eyes — his eyes are awake — and can’t do anything about it,” she said. “Knowing that he would never walk again possibly, it’s disheartening. What happened is unacceptable and it’s inexcusable.”

Through tears, Doreen Coleman, Cox’s mother, said she and her family are nevertheless praying for Cox’s full recovery.

“I don’t want to see my son in that damn room with that thing on his neck, on his face,” she said. “I want him to keep coming in and out of the house, saying, ‘You alright? You need to go eat,’ or ‘You need something?’ Now I don’t know how long it’s going to be before he gets to go outside.”

LaToya Boomer, another one of Cox’s sisters, said she could barely finish watching the surveillance video of her brother. She demanded that the officers be held accountable for their actions.

“I’m calling for the officers involved to be fired and arrested,” she said. “And I’m calling for any bystanders that was watching but didn’t participate, that didn’t say anything, for them to be suspended and retrained because I always say, if you see something, say something, intervene.”

“Nobody said anything,” she added.

Crump also raised allegations that the officer driving the van could have been speeding or texting while driving. He said Cox’s family and legal team are demanding transparency from the police department about whether this was, in fact, the case.

“We want the cell phone records. We want the transcripts from the inner department communications. We want the policies and procedures,” Crump said. “We’re going to fully explore … every possible legal remedy to give full justice, not just partial justice, but full justice to the family of Randy Cox and Randy Cox himself.”

Man with rifle and body armor tries to break into FBI office: Police

Three-month-old boy dies after being left in hot car: Police